Motion: Heating Up
Dwyane Wade's 34 points, 8 rebounds and 8 assists led the way in the Heat's 114-98 win over the Celtics.
Dwyane's World

Go On, Charge Me! 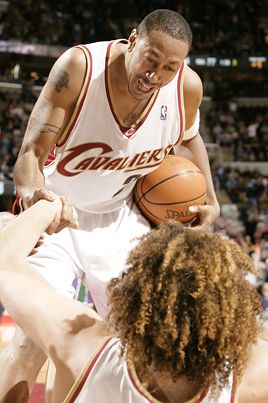 Monday's Best
Raymond Felton, Bobcats guard: Success for Team Tourniquet. The rookie goes for 24 points (8-for-11 FGs) and nine dimes in the MRI's 119-106 win over the Sonics. See what happens when you remove all the banana peels from around the bench? That's two in a row.

Monday's Worst
Kyle Korver, Sixers forward: Fireballer Bob Gibson played ball at Creighton, like Korver. But after K2 missed all six shots in 13 minutes of a 87-81 loss to the Rockets, we would like to give the 70-year-old Gibby, with Harlem Globetrotters membership on his resume, a chance to hoist the shots.

"'I feel like the Seattle Seahawks. It's remarkable. There's like five games this year where we've not gotten a call in the last 30 seconds. After awhile, you realize you don't get those games back, and it's tough to take."
-- Suns guard Steve Nash, chafing at a no-call on a borderline goaltending by Kevin Garnett at the end of the Timberwolves' 103-101 win in Phoenix.

For the longest time, conventional wisdom on building a team said to get two superstars, preferably a guard and a big, and then fill the rest of the lineup with role players.

His team is the exact opposite of that of former teammate Isiah Thomas. The Knicks are trying to build a team on offensive firepower, potential and pizzazz. Instead of looking for bargains, Isiah tries to make a big splash with nearly every acquisition, no matter what the cost. He has double the payroll and half the wins, and almost none of the respect that Dumars has garned throughout the league. Dumars is the smartest man in basketball, and he is commissioner David Stern's greatest hope to reclaim all that is right and good about basketball -- given Stern's stated desire to have teams built on the foundation of good management and teamwork.

And Dumars' rules for rebuilding have made many GMs rethink their strategies for success in the NBA.

Brand Expects All-Star Nod
The numbers alone were never enough to get Elton Brand invited back to the All-Star Game, but since there's no longer any reason to laugh at what the Los Angeles Clippers are doing, he expects to be recognized. Winning makes all the difference. "That's the way it should be," Brand said. "I learned that my rookie year (with Chicago). I averaged 20 (points) and 10 (rebounds), while Dale Davis averaged nine and eight. He was on Indiana and they were in second place in the East or whatever, and he got the All-Star nod. This time we're the fourth-best team in the West; I expect to be there." -- Westchester Journal News

I'm a non-bandwagon Pistons fan who enjoyed playing the disrespect card. But do you think the Pistons are getting so much attention because Larry Brown can't take credit anymore? I know they're 39-7, but if LB was there their success would be attributed to him more than the players. Like McHale from Minnesota said, "Flip was handed the keys to a Mercedes," McHale said of Saunders' new job with the Pistons. "He should be the happiest man in basketball."

I agree with Greg Anthony's take on Cleveland's point guard situation. But I think he didn't give Eric Snow enough credit when he said we're not getting anything from the point. Snow's a tough defender who's been taking better shots and making them this year. No, he's not the starter we need, but don't trash him.