Grim And Bear It 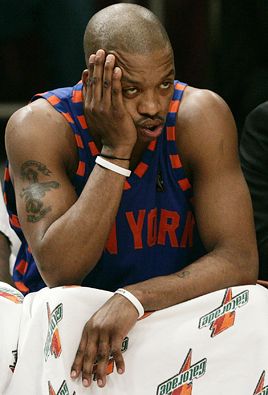 AP Photo/Frank Franklin II
Steve Francis is not thrilled about losing to Denver. The ex-Magic man had six points in 24 minutes.

Monday's Best
Chris Kaman, Clippers center: Sometimes, up, sometimes down. That's Kaman. His 24 points and 23 rebounds in the 95-87 win over Minnesota definitely qualifies as an "up" for the big man from Central Michigan.

Monday's Worst
Quentin Richardson, Knicks guard: He missed all eight of his shots in the loss to Denver. Having a sprained thumb couldn't have helped. Getting dealt from winning Phoenix to league doormat must hurt even more now.

Quote of the Day
"We're just not a good defensive team."
-- Knicks guard Stephon Marbury, after his team lost to the Nuggets, 108-96. (His coach Larry Brown concurs, lamenting the lack of forced turnovers and blocked shots, and not getting the loose balls)


Later Comes Sooner Than Anyone Ever Wants

Jon (Columbus, Ohio): When all the players that are injured for the Cavs right now come back, do you think they stand a chance in the playoffs?

Bill Walton: Cleveland is in an enviable position having the future on its roster. While the present is better than it used to be, how long will LeBron remain staisfied listening to the demands for patience. His success in the NBA has very little to do with himself. It's like when Wooden told me 38 years ago, "You're ultimate level of success will be about the people and players around you."

With the limitations of some of LeBron's teammates he's often out there by himself. It was nice to get Flip Murray, though. Cleveland has made small steps to make it a more positive situation, but the question is still whether LeBron can do it himself. But every team in the East besides Detroit and Miami has issues. New Jersey with basically four players, no star power in Indiana, Washington's inconsistency, no one playing at Iverson's pace in Philly and the mystery of Milwaukee.

You could make the case Cleveland is the fourth-best in the East -- it might not be enough. Only the championship will make LeBron happy and I want to see a smile on his face. While he's just getting started and has the world ahead of him, this is such a tough league that you never know what's going to happen and you better get it done sooner because later comes a lot quicker than anyone ever wants.

However, Garnett would need to play nearly six years to tie the record for such a streak: Wilt Chamberlain had 467 consecutive 10-rebound games from 1963-68.

Film documentaries on sports usually come off sappy, with no center, without soul.

And even though the endings are often predictable, the core is what sells us on the product.

One that is the younger cousin of Stephon Marbury. One that Steph warned me about when Bassy was in fifth grade. One that, before his senior year in high school, I was quoted in Beckett Basketball as saying I'd select him over LeBron if he came out the same year.

One that I was certain -- as certain as Kanye is about himself -- was going to be the second coming of Isiah Thomas. If not better.

In 2003, Sebastian Telfair was the best point guard in the country not already in the NBA.

His imitation of life is the post-told version of Darcy Frey's "The Last Shot" and Spike Lee's "He Got Game." The reason Hock was able to put a camera on Telfair and predict he was going to have a Tribeca Film Festival winner was that he'd seen the story play out before in Stephon Marbury's life. And although Lee and Frey both fictionalized Steph's last year in high school, Hock's guess that Sebastian's was going to be more dramatic was easy because Bassy had already done in the first three years things his big cousin had never done.