The Bulls kept pace with the contenders for a playoff berth, holding on to the No. 8 seed with a 96-90 win over Atlanta. 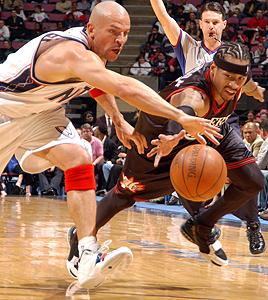 Terrence Vaccaro/ NBAE via Getty Images
Jason Kidd and Allen Iverson try to get their hands on the ball. The Sixers won, but they would be out of the playoffs if the season ended today because Chicago holds the tiebreak advantage.

Wednesday's Best
Sixers guard Allen Iverson: The Answer's effort (40 points, 10 assists) keeps Philly in contention with a 116-96 win in Jersey. Next up: a date with the Heat.

Wednesday's Worst
Cavs guard Flip Murray: Since joining the Cavs on Feb. 24, Flip has been a difference maker. As his team got blown out by Detroit, Murray could not deal the Cavs in while LBJ sat, making 1 of 7 shots, good for his lowest output (two points) in a Cleveland uniform.

Quote of the Day
"As I said in the locker room, people die to get to 50 [wins]. To get to 60 is really something. Every win beyond that shows that you've been able to play at a pretty high level for a long time."
-- Pistons coach Flip Saunders, whose team improved to 63-15 with a win over Cleveland.


The Story On Preseason Picks

My preseason MVP pick was LeBron James, and that one is looking better with each passing day. His Cavaliers were running so hot and cold through the first four months of the season that James was getting overlooked in the MVP debate, an omission for which I was as guilty as anyone as I focused my attention on Chauncey Billups, then Dirk Nowitzki, then Tony Parker and Steve Nash. But with James leading the Cavs to 11 victories in their last 12 games and scoring at least 30 in the last nine, I believe he and his team are making just enough of a push at just the right time to make that prediction a possible winner, too.

For Rookie of the Year, I went with Sarunas Jasikevicius, and this is where my powers of foretelling the future begin to take a dive.

Gerald Green scored 22 points Wednesday. At 20 years and 76 days old, Green became the youngest player in the Celtics' franchise history to score 20 points in a game. The previous mark was 20 years, 82 days, by Antoine Walker on Nov. 2, 1996.

Derreck (Veneta, Ore.): C'mon Jim, I know it's a touchy subject, but do you feel any vindication seeing how the Sixers have performed this year with basically the same roster as you had last season?

Jim O'Brien: I really don't think I needed to feel vindicated. We took a team that won 33 games the year before and won 43 and got them into the playoffs. What is interesting is that Billy King is starting to realize his young players are not as good as he thought they were. When we took over in Philly and he told me of his opinion of all his young players, I did not agree that they were nearly as good as he thought they were. Defense is hurting them badly. We were 11th in field goal defense last year and now they are 22nd. It is also interesting to see that the fans have turned their backs on what is happening.

Joe (NYC): Jim what can the Kings do in playoffs? I think they can beat Phoenix and take SA to 7 games.

Jim O'Brien: The Kings are a dangerous team. But they are not in the Spurs category. As the playoffs roll around, a lot of us want a dark horse to step up and pull a George Mason. It doesn't happen much at the college level and even less at the pro level.

Doug (Cleveland): Has Mike James matured into being a high-quality guard or is he just an average player on a bad team? Will he stay in Toronto either way?

Jim O'Brien: I take great pride in watching Mike's success because we gave him his real start in Boston. He is a wonderful young man. He loves the game and wants to be in the gym all day. I love what he is doing from a scoring standpoint. His deficiencies are he is a score-first, pass-second point guard and his defense is not strong. He will get the mid-level. If he wants more, I don't see the Raptors keeping him.