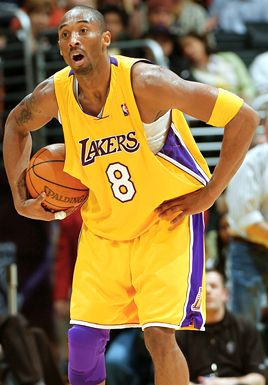 Noah Graham/NBAE via Getty Images
Kobe Bryant is bound to flash a Say What? look when he hears what we think of his first-round chances against Phoenix.

The decision to proceed with Jerry Sloan in charge or move into the Phil Johnson Era will be made by Sloan, according to Jazz owner Larry Miller.

And when I see Sloan on Saturday night in Dallas, I'll be tempted to lobby one of my favorite X-and-O interview subjects to come back for a 19th season, even though Sloan always insists on going back to the solitude of his Illinois farm at season's end to make the official decision.

The 64-year-old has two seasons left on his contract and would have to coach both to have the longest tenure with one team in NBA and NHL history. Sloan is already the all-time NBA leader for continuous bench service with one team (18 seasons) and thus just shy of the hockey record: Jack Adams' 20 consecutive seasons coaching Detroit from 1927-47.

Sloan doesn't have a shot at the NFL record (29 seasons for Dallas' Tom Landry and Green Bay's Curly Lambeau) and has even less of a shot at Connie Mack's 50 years (from 1901-1950) managing baseball's Philadelphia Athletics. Of course, as you'd expect knowing how competitive Sloan is and always will be, all he really wants is the playoff berth that is slipping away for a third successive season.

"I said before the season that I think we should be a playoff team," Sloan said. "I don't think a lot of people felt that way outside of our organization. We aren't [deep] enough to have people out [with injuries] as long as we did, but I don't like to use that as an excuse. I still think we should be a little better than what we've been."

Asked how hard it is to coach without the certainty of seeing the precise execution that became synonymous with the Jazz in the John Stockton-to-Karl Malone years, Sloan told me recently: "That's not anything I didn't expect. If I didn't think that would happen, I'd have tried to get out and go somewhere else. That's just part of coaching. I knew it was going to be a hard-fought thing to try to teach [young] guys. I'm sure we could probably open things up a little bit and play a different way sometimes. But I'm not sure it's a good teacher for playoff basketball."

Blazers coach Nate McMillan certainly encouraged free agent-to-be Joel Przybilla to voice his displeasure with the lack of effort from some teammates, but team sources say it was more Przybilla's frustration than McMillan's invitation that prompted the 7-1 center to take those criticisms public.

Yet sources also insist that the biggest factor working against Portland in its quest to re-sign Przybilla, more than the increasing apathy that has plagued the Blazers in this 21-57 season, is its inability to offer Przybilla more than the mid-level exception this summer.

Owner Paul Allen's decision to veto the deal that would have banished the contracts of Darius Miles and Theo Ratliff to New York at the February trade deadline cost Portland the flexibility needed to match offers above the league average. And, yes, Przybilla is likely to get a couple as the league's No. 7 shot-blocker.

Commissioner Stern says we're all "over-concerned" with the NBA's seeding system. Gregg Popovich, whose Spurs are likely to face Dallas in the second round of the playoffs because of that system, says he must respectfully "disagree."

What does history say?

Recent history actually does offer Dallas some encouragement even though the No. 1 seed is almost certainly San Antonio-bound. In the teams' two playoff series since 2001, the visiting team actually has won six of the 11 games.


Film Session
Playoff positioning
Marc Stein makes his weekly visit to the ESPNews HotList to discuss how closely Tuesday's Clippers-Grizzlies matchup will be monitored in the league office and which team -- Chicago or Philadelphia -- is more likely to claim the No. 8 spot in the East.

Saro (New York City): Point guards seem to be the hot MVP candidates ever since Steve Nash broke through last year to win the big award. There's been a lot of banter about Chauncey Billups or Nash this season, and deservedly so, but I wonder if all this talk makes Jason Kidd's MVP snubbing in 2002 -- when he turned a perennial Nets loser into a NBA Finals participant in his first season -- seem even more unfair? Kidd not only turned around that team, he saved an entire franchise and made me care about hoops again.

Stein: I get this one a lot, Saro, but I've got to be honest. I just don't think what happened to Kidd is a "snubbing" and I never have.

Kidd narrowly lost out to Duncan in an MVP race so competitive that Shaquille O'Neal, who wound up leading the Lakers to a third successive championship at season's end, finished a distant third. But I can't remember anyone who chose Duncan over Kidd because Kidd played the point. If memory serves, it had more to do with New Jersey's undeniable turnaround coming in a horrifically weak Eastern Conference … while Duncan was winning games at both ends in a West that had four teams with at least 57 wins.

Winning the MVP award, in other words, depends as much on your competition as anything.

So there's little point comparing Nash's MVP-worthiness last season to Kidd's in 2002 or any of John Stockton's finest hours -- another anti-Nash sentiment that often finds its way to my mailbag -- because every season is different. Every MVP race is different.

The mission of an MVP voter, as I've always understood it, is to identify the player who had the best season. Now, as Ric Bucher explained the other day in wonderful detail, there is no consensus among voters on what criteria should be used to determine who had the best season. Seemingly everyone has their own MVP definition. But that's basically what we're all trying to do.

Regular readers here know that team success, measured against the level of competition and what was reasonably expected from that team when the season started, guides me most. Kobe Bryant, for example, will find his way onto my five-man ballot, but he can't be my MVP winner -- no matter how many points he scores -- if his team isn't among the elite. LeBron James, furthermore, wasn't a contender for my vote until the Cavs unleashed a 15-4 spurt that gave them a shot at 50 wins. And now he is.

What I will concede is that point guards do have a better shot than Kidd did to be recognized as an elite team's dominant force because of the rule changes limiting defensive contact on the perimeter. The gradual erosion of traditional, back-to-the-basket big men along with the new rules -- which happened to be instituted just as Nash was leaving Dallas to return to Phoenix -- have combined to change the game drastically. Point guards as good as Nash and Billups are the new centers.

Kidd, too. He might not be what he was in 2002, as he continues to recover from microfracture knee surgery at 33, but he's still up there.

"Baseball is an individual sport played by nine guys. In basketball, you're so reliant on the other guys."

Just kidding. Even Shaquille O'Neal needs Wade desperately, especially in the forthcoming playoffs Shaq has been saving himself for.

But Shaq didn't look too bad without him Tuesday against Toronto, filling the void created by Wade's absence with 15 points, 11 rebounds and a career-high 10 assists for his second career triple-double … and his first since November 1993. That time, Shaq added 15 blocks to his 24 points and 28 rebounds.

The 848 games that elapsed between Shaq's triple-doubles is the second-longest span in league history, behind Charles Oakley's 955-game drought between a triple-double in 1987 with Chicago and another 14 seasons later for the Raptors.