The Wizards got the highly coveted No. 5 spot in the playoffs by downing the Pistons.

Washington Statement
Meadowlands On His Mind 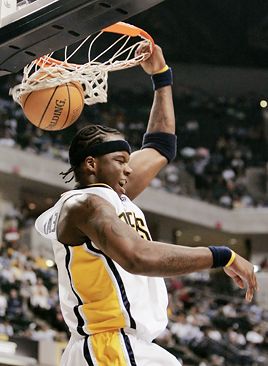 AP Photo/Darron Cummings
Pacers center Jermaine O'Neal slams home a solid game as a warm-up for the Nets with 24 points, 13 rebounds, nine turnovers (!) and six blocks in the 89-83 win over the Magic.

Wednesday's Best
Wizards forward Caron Butler: In his third game back from a thumb injury, scored 33 points and pulled down 12 rebounds as the Wiz clinched a playoff date with the Cavs by beating Detroit. The Pistons, it should be noted, were so unconcerned about winning that 'Sheed was chucking T-shirts into the crowd in the fourth quarter.

Wednesday's Worst
Timberwolves forward Mark Madsen: The Dance Party tossed up 15 shots in his team's finale, more hoisting than he had attempted in all previous April, 2006 games combined. Um, Mad Dog made one. And all seven 3-pointers went awry. The Wolves season ends with a 102-92 loss to Memphis.

Quote of the Day
"Our season is starting in a couple of days. The last 10 games, you just wanted the regular season to finish and get ready for the excitement. The atmosphere changes in one second."
-- Spurs guard Manu Ginobili, whose team beat Houston and earned a franchise-best 63rd win.


Lakers? Not So Fast

DannyB, California: How is Phoenix going to stop Kwame, Lamar, and Kobe from scoring inside without Kurt Thomas? I say Lakers in 7. How about you?

Chris Broussard: Well, I think Phoenix is going to win that series. They're hoping Brian Grant can stay healthy. Now, Boris Diaw is also a solid post defender. He's quick and long and strong enough to handle those guys. Then they've got Marion. One thing that enables Diaw to defend the post is they front a lot and have Marion come to help. I don't expect Kwame and Odom to punish Phoenix.

Zander (LA): Now what do the Blazers do? Zach Randolph and Darius Miles ask to be traded. I know there is a light at the end of the tunnel? What exactly is that? Share with me please.

Chris Broussard: Well, Miles has been one headache after another there. He feels like he's a superstar already, even though he hasn't performed to that level. This year when he was putting up some decent numbers, that went to his head even more. He's not a good influence on the younger players. He hasn't bought into what the coach is trying to good. As far as Zach, they feel like he's had his issues, but if they can get him away from some of the negative influences, he'll be a team guy. He's kind of a follower, if he's with a negative team he'll go that way. I think they'll try to stay with Zach and try to move Darius.

Kobe Bryant scored 35 points Wednesday to finish the season with 2,832 and surpass the single-season career-high point total of both Kareem Abdul-Jabbar (2,822 in 1971-72) and Bob McAdoo (2,831 in 1974-75) in the process. The only players in NBA history to score more points in a season than Bryant are Wilt Chamberlain (four times) and Michael Jordan (twice).

Travis (MI): So what about playing basketball again ... anywhere?

Paul Shirley: I'm thinking about changing direction and entering the priesthood. I feel like a nice vow of celibacy is what I need right now ... actually, basketball is on my mind right now. When we finish editing the show, I'm back to it. It just pays too well. And since I'm a greedy bastard...

Paul Shirley: The European ones. Like it's their job.

Mary (Los Angeles): Back in November, I bet my co-worker lunch at Wahoo's that you would get picked up for at least one 10-day contract at some point this season. Since this is the last day of NBA regular season play, I think I lose. Can you please make this up to me?

Paul Shirley: First, it's amazing that I was the subject of a bet. (Had to get this one posted so that it will go down in evidence.) Second, it was a pretty good bet on your part -- it's happened the last three years. If my descent into Hollywood self-parody had not happened, I think a 10-day might have.