The tandem of Dwyane Wade and Shaquille O'Neal lived up to their billing in Game 3, combining to subdue the Pistons 98-83.

Heat too much for Pistons 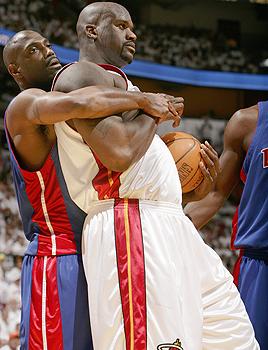 AP Photo/Eric Gay
Call it Hack-A-Shaq, Hug-A-Shaq or just plain U-G-L-Y. Whatever it was, it didn't work on Saturday as O'Neal made half his FTs. In one comical sequence, he missed two, got his own rebound, shot and missed, got fouled, made both, and then got excited and gave both points back by whacking Rip Hamilton.

Saturday's Best
Miami's Shaq-Wade: Shaquille O'Neal and Dwyane Wade tag-teamed the Pistons to death on Saturday, combining for 24-of-32 shooting, 20 rebounds and 62 points. When they play that way, all the angst about the supporting cast is beside the point.

Saturday's Worst
Pistons center Ben Wallace: Thursday's star Tayshaun Prince was terrible, but Big Ben was epically awful. The Defensive Player of the Year had zero blocked shots and only six boards in 34 minutes. And his 2-for-10 performance from the line (for his only two points) was either tragic or hilarious, depending on your point of view.

Quote of the Day
"We're the first team in the playoffs to 10 wins. We need six more."
-- Heat coach Pat Riley

• See how all 19 who played stacked up
• Hollinger playoff stats (Dirk No. 2)
• Plus/minus stats from 82games.com


FTs, From Worst To First

Everyone who plays Fantasy Basketball knows Shaquille O'Neal and Ben Wallace are fool's gold, despite their production, because of their free-throw shooting -- they bring down your FT stats and kill your team.

While their flaw hasn't been fatal in the playoffs, they have provided some of the most unsightly terms in the NBA vocabulary -- Hack-a-Shaq and its little brother, Bash-a-Ben (a.k.a. loss of possession for the Pistons).

Their poor shooting seems to have dragged their teams down to their level -- of the 16 playoff teams, the Pistons are 15th in FT percentage (72.2 percent), and the Heat are dead last (70.5). But with so-so competition in the East, the Pistons (barely) and the Heat have survived this Achilles' heel so far.

It might be their undoing in the NBA Finals, though, where either Detroit or Miami will face a great free-throw shooting team: Phoenix leads all playoff teams (84.0 percent), and Dallas is second (82.1).


How To Stop The Suns

An excerpt from the Scouts Inc. breakdown and preview of Game 3 in the West finals:

This may be the biggest key to the series for the Mavs.

They improved this important phase of defense in Game 2 by allowing the Suns 21 fast-break points, down from their 32 in Game 1.

The Mavs have decided to send only one or two players to the glass on a missed shot and sprint the other three back to protect their basket.

They need to improve one big aspect of their transition defense.

Their natural instinct is to sprint back to the paint, but the Mavs have been vulnerable to the trailer at the 3-point line.

They must sprint, communicate better and find all five Suns players, especially Tim Thomas trailing at the 3-point line.

Pick-and-roll defense will continue to be a challenge for the Mavs all series. Even though they switched the pick-and-rolls, they are attempting to support the mismatches better by bringing more help to the ball.

Avery Johnson used DeSagana Diop in Game 2 and he provided a nice lift for the Mavs. His presence in the paint denied the Suns ability to get to the rim as easily as in Game 1.

Bad Things Come In 3s
Maybe the Detroit Pistons had a good reason to lose Game 3 on Saturday.

Maybe they lost because they're superstitious.

We know what kind of success the Pistons have had in the playoffs in recent years. But they are now 1-6 in their last seven Game 3s.

The only Game 3 victory in their last seven?

That came in the 2005 NBA Finals, which happens to be the only series the Pistons have lost in the playoffs since 2003.