From Hospital To Hardwood

Shaq was immense (28 points and 16 rebounds) while Jason Williams scored 21 as Dwyane Wade battled dehydration and flu-like symptoms to score 14 points in the Game 6 clincher.

Things Are Looking Up For Shaq 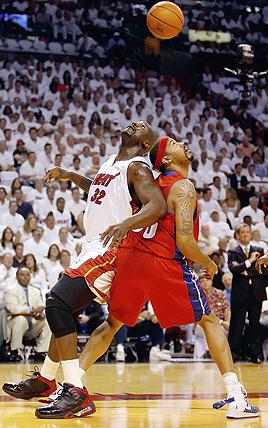 Eliot J. Schechter/Getty Images
Seasoned vets like Shaquille O'Neal and Rasheed Wallace always keep their eyes on the prize. Shaq will don his third uniform in an NBA Finals (Magic, Lakers and Heat).

Friday's Best
Heat guard Jason Williams: Of course, Shaq's 28 points, 16 boards and five blocks should be honored, but with Dwyane Wade a question mark, Williams' 21 points (making his first ten shots!) were just what the Heat needed from a complementary player.

Quote of the Day
"I only celebrate it when it's really over. ... The job is not done."
-- Heat center Shaquille O'Neal, refusing to join in the touching of the Eastern Conference title trophy.

• See how all 18 who played stacked up
• Hollinger playoff stats (Dirk's No. 2)
• Plus/minus stats from 82games.com

Victor Baldizon/NBAE via Getty Images)
Was this Ben Wallace's final game in a Detroit uniform? If Detroit doesn't show him the money, that is quite possible.


"Coy, Curt And Far From Candid"

"I'm pretty sure everyone knows where my heart is," Ben Wallace finally conceded after ducking nearly every question about his future that came his way.

"It's in my chest," Wallace said. But will that heart and that chest remain committed to the Detroit Pistons?

Wallace wouldn't go so far as to say anything resembling those words.

The four-time Defensive Player of the Year was coy, curt and far from candid Friday night after the Pistons' season ended with a Game 6 loss to the Miami Heat, and the prospect of its being Big Ben's last game in a Pistons uniform was a notion he wouldn't quash in the aftermath of the defeat.

Wallace becomes an unrestricted free agent as of July 1, and it has widely been assumed -- in large part because of Wallace's public statements -- that he'll return to the franchise where he turned from a journeyman to a centerpiece.

All Wallace needed to say Friday night was that he wanted and expected to return, but he wouldn't go even that far while initially ducking questions about his future and then giving a few vague answers before exiting the locker room and getting on the team bus that would take the Pistons to the airport for the long flight back to Detroit.

After firing his old agent and saying he planned to have an attorney (billing on an hourly basis rather than taking a percentage) negotiate his new deal, Wallace went out last month and hired one of the most powerful deal brokers in the business, Arn Tellem.

"I needed an agent, that's all that is," Wallace said. "You know, everyone needs somebody to talk for them every now and then. They get tired of hearing your voice."

That statement was a lot more than Wallace would concede at the start of his interview, answering a somewhat vague question about what happens next with a curt "Next question."


Physical Toll Of The Game
Playing through June is everyone's goal in the league because it's reserved for the elite. But can the average fan comprehend the immense physical toll it takes on the human body?

After a certain amount of extreme physical exertion, a player's muscles beg him to stop and his body starts to break down. These players are phenomenal physical specimens whose bodies run like machines, but at a certain point, fatigue from the 100-plus games they have played catches up to them.

Every one of the key players that we are fascinated by night after night is experiencing varying degrees of pain. In the locker room after a taxing game, the number of ice packs the players have secured to their ailing bodies makes you feel like you are walking into a giant cooler.

The training staff and medical personnel tend to their teams relentlessly, mustering cures for sore and overworked bodies that take hard beatings during the games. In most cases this admirable care is unseen and underappreciated.

Look at Raja Bell, who dropped like a fly simply running up the court when his calf was seized by severe pain. He suffered a mild to moderate tear when he was not even going all-out at the time.

The pace of the playoffs in the Western Conference has been blistering, and at times it has taken a visible toll on Steve Nash. He admits to having heavy legs and an aching back at times but claims most players are dealing with these conditions.