Getting 36 points from their banged-up superstar Dwyane Wade and forcing Dirk Nowitzki to pick himself up off the floor more times than he had in the entire series, the Heat dominated Game 4 of the NBA Finals and beat the Mavs, 98-74, ensuring this series will be going at least six games.

Floored By The Heat 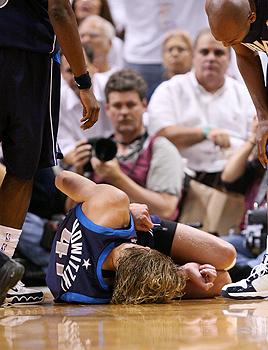 Thursday's Best
Heat guard Dwyane Wade: Gets 36 points on 13-for-23 shooting, leading the Heat to a Game 4 win. Big honorable mention to James Posey, who came off the bench to post 15 points and 10 rebounds.

Thursday's Worst
Mavs forward Dirk Nowitzki: After he took a few blows early, his shooting was not the same. Under a hail of Hasselhoff chants, to boot, sometimes he must have felt like he was run over by the crime-fighting K.I.T.T. car. In reality, just a crime-fighting officer Shaq. Nowitzki made only 2-of-14 field-goal attempts.

Thursday's Worst, Part 2
The Mavs set an NBA Finals record for lowest point total in a quarter. Seven points in the fourth on 2-of-18 shooting (11.1 percent), including 0-of-8 from behind the arc.

Quote of the Day
"My impression was my daughters tackle me harder when I come home ... It actually felt pretty good to get hit like that. Thank you, Jerry, I appreciate it."
-- Heat center Shaquille O'Neal on a hard foul courtesy Jerry Stackhouse.

• See how all 21 who played stacked up
• Hollinger playoff stats (Stack's No. 52)
• Plus/minus stats from 82games.com

The NBA is going to take another look at Jerry Stackhouse's flagrant foul against Shaquille O'Neal, which means there's no guarantee Stack will be in uniform for Game 5.

It might seem unlikely he'll be suspended, but it's not out of the question.

Though O'Neal simply laughed the foul off by saying his daughters hit harder, the foul certainly seemed to fit the rule-book definition of a flagrant foul-category 2, which states such a foul to be unnecessary and excessive (as opposed to a category-1 flagrant, which is merely unnecessary).

"All flagrants are reviewed, and this case is no different," said NBA vice president Stu Jackson, who has the discretion to suspend Stackhouse or not suspend him for Game 5 if he indeed reclassifies the foul as a category 2. Throwing a punch brings an automatic suspension (just ask Jason Terry, who sat out Game 6 against San Antonio for taking a swing at Michael Finley), but committing a flagrant-category 2 does not bring a suspension unless Jackson feels one is merited.

Stackhouse's flagrant foul came after Jason Williams stole the ball and was going in uncontested but saw O'Neal trailing close behind. He passed the ball to Shaq, and Stackhouse came across the lane and raked O'Neal across the upper chest and face, knocking him hard to the floor.

Antoine Walker picked up a technical for going after Stackhouse, and Stackhouse got to shoot that technical free throw when the referees decided against calling a flagrant-category 2 foul against him, which would have brought an automatic ejection. But after Stackhouse made his shot, O'Neal went to the line and knocked down both of his to get the lead up to 20, 72-52.

"My impression was my daughters tackle me harder when I come home," O'Neal said. "You know, I'm one of the last players from the old school, and you know, you just have to take a hard foul like that and keep on moving. It actually felt pretty good to get hit like that. Thank you, Jerry, I appreciate it."

The situation could have gotten out of control after the foul was committed, with Heat coach Pat Riley running onto the floor and into the fray, and Walker going after Stackhouse.

"You've got heroes like Antoine Walker coming up feeling like he's got to say something. For what? He hasn't fought one time in this league," Dallas' Darrell Armstrong said. "All of the sudden you're getting brave?"

But the referees separated the teams, and nothing ever escalated.

And unless Jackson comes down extra hard on Stackhouse, this flagrant foul won't be escalated in severity. The tricky thing is, however, that there's really no telling what Jackson will do.

Game 4 was physical. ESPN's experts review a night where toughness was at a premium.

Elias Says
With 36 points in Thursday night's victory, Dwyane Wade has now scored 129 points in this series. That's the second-most points ever scored by an NBA player in his first four career games in the Finals. The top four: Allen Iverson (141), Wade (129), Willis Reed (127) and Kareem Abdul-Jabbar (127).