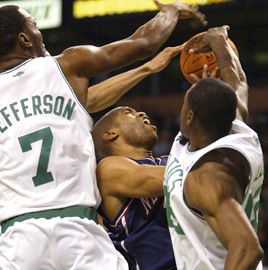 
Martin Not Short With This Shot

What makes a blowout compelling viewing? Even a blowout in which Dirk Nowitzki doesn't play after the first quarter because of an eye injury? Toronto's run of 629 consecutive games with at least one 3-pointer, that's what.

The streak -- now in its eighth season -- nearly perished in the Raps' 117-98 loss in Dallas, livening up fourth-quarter garbage time more than you can imagine. You couldn't help trying to will the Raps from press row to hoist indiscriminate triples to preserve the streak. The subliminal messages, though, apparently weren't getting through because the Raps attempted only one 3 in the fourth quarter ... until Darrick Martin started dribbling out the final few seconds of the clock from the right wing.

There was no NEED to shoot, obviously, with Toronto down 22, but Martin (one of the few Bruins out there with the Stein Line seal of approval) did launch just before the buzzer sounded and naturally swished it through. Great, great theatre. The streak lives.

"I knew, I knew," Martin told me afterward with a wink. "It's called being a veteran."

According to a story in the current issue of GQ magazine, LeBron James and New England quarterback Tom Brady were "fleeced" during a card game at rap mogul Jay-Z's 40/40 club in New York. So who lost more? "It wasn't me," James said. "I try not to lose." James said Yankees third baseman Alex Rodriguez has also joined the high-stakes, high-profile table. "We always have fun," he said.

• Cavs G Larry Hughes missed his seventh game with a high ankle sprain. He and the Cavaliers remain noncommittal about his return, but Hughes still isn't able to run comfortably.

• Knicks G Nate Robinson, the NBA's reigning slam dunk champion, was called for traveling in the second quarter when he tried to bounce the ball off the floor and slam it. "I won't be trying it again unless we're up by 20," he said. "But that's spontaneous Nate Robinson. I can't control that."

• The announced Magic-Sonics crowd was 14,232, but KeyArena was only half full, the result of an incoming storm. A similar storm Monday night paralyzed traffic in the region.

• Phoenix has won seven of eight after a 1-5 start.

• The Warriors played 12 home games in November -- a franchise record for one month -- and just four road games. After Saturday's visit from the Bucks, nine of their next 12 contests are on the road.

• Rookie Steve Novak got his first start for the Rockets, going 2-for-5 for six points.