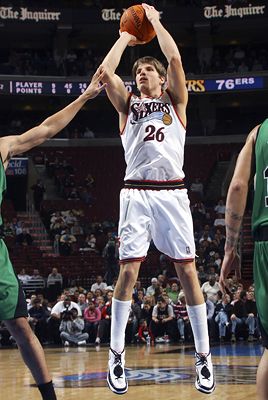 Jesse D. Garrabrant/NBAE via Getty Images
Teams love shooters of Kyle Korver's caliber. None more than the Sixers, who won't be parting with him anytime soon.

Mavericks owner Mark Cuban, a long-time Allen Iverson admirer, will admit to one scenario where Dallas would be chasing Iverson.

"If they bought him out and waived him," Cuban said, knowing full well that's not an option Philly is about to consider.

Dallas, you see, is facing the league's second-highest bill for luxury tax at season's end at $10.2 million, trailing only New York's $44-plus million.

So for all the inevitable questions about how Iverson's game would mesh with Dirk Nowitzki's -- and, of greater concern, how Iverson's well-chronicled aversion to practice would sit with coach Avery Johnson's given the Lil' General's reverence for it -- finances have dissuaded the Mavericks as much as anything.

Their offense in support of Nowitzki could certainly use a consistency jolt, having generated two 20-point scorers on the same night only nine times in the Mavs' first 22 games. That puts them on a pace for 34 games with two 20-point men, compared to 48 last season.

But Dallas will continue to be a luxury-tax team for the next two seasons after this one if they absorb Iverson's contract. The dollar-for-dollar tax would thus make him an $80 million gamble for the Mavs, compared to the mere $40 million left on Iverson's contract in 2007-08 and '08-09.

So how does a team try to replicate the Phoenix Suns' offense?

Especially when they don't have Steve Nash to play the point?

George Karl says his answer is practicing with a 16-second shot clock at all times, as opposed to the usual 24 seconds ... although Nuggets assistant coach Doug Moe apparently wouldn't mind shaving a couple more seconds off the timer.

Two shot-clock notes in one week is two more than usual, but this one grabbed me as well.

Why was Kobe Bryant shooting 48 percent from the field entering Friday's play? That would represent a career high if he can maintain it all season ... and the word from at least one segment of the scouting community suggests that it's not simply because the Lakers played almost exclusively at Staples Center for the first six weeks of the season.

L.A. -- like Phoenix and Denver -- is apparently another team that has been scoring quite efficiently in the 11-to-15-second range of the shot clock.

Bryant, according to numbers available at 82games.com, entered this week shooting better than 70 percent from the field in that time range, with roughly half of those baskets set up by an assist.

From the scout's perspective, it means that the Lakers are successfully running early offense to punish defenses with a quick play once they've been lulled into thinking they've contained a transition opportunity.

Force Bryant to take a shot with at least 21 seconds gone and, not surprisingly, he's shooting closer to 30 percent.

Q: How does it feel to know that, in a couple months, your long wait to be an All-Star will finally be over?

Q: Bernard King was one of my favorite players and your game is frequently compared to his. Have you studied tapes of him? Do you see a connection?

A: He's one of my favorites, too. That's like my favorite basketball player of all time. He was in my commercial last year. When I was growing up, I used to pattern my game after his.

Q: How are you and George Karl getting along these days?

Q: OK, you know what I'm going to ask next. Do you want to play with Allen Iverson? Can it really work if you both need the ball? Are you pushing for that trade?

A: I wouldn't mind playing with him. I think we can [play together]. But I try to stay out of it. If they want my opinion, I think they'll come to me and ask me for it. I'm letting the front office handle that.

Q: As the team stands right now, how good are the Nuggets? How worried are you about Utah's fast start?

A: We've still been snakebit with injuries, with Nene and Kenyon [Martin]. But I still think we can win 50 games.


Mamba And The Answer 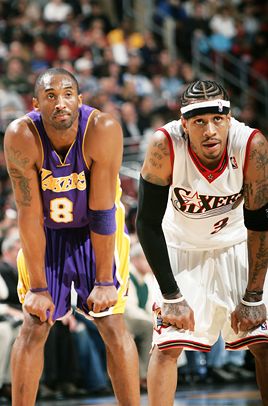 Jesse D. Garrabrant/Getty Images
Kobe and A.I. both have a Philly connection, and together they've had many memorable battles on the court. Could they be sharing the same backcourt next? (See Box 10.)

"It shows the insignificance of camp."

Lakers coach Phil Jackson, on what people should take from his team's 15-7 start after Jackson and Kobe Bryant missed almost all of training camp with their recoveries from hip and knee surgery, respectively.

Jackson, though, did acknowledge that he initially viewed the Lakers' favorable early schedule -- 16 of their first 20 games at Staples Center -- as "unfortunate" because of L.A.'s slew of early injuries. "We thought if we didn't make hay ... wow," Jackson said, before an Opening Night victory over the Phoenix Suns (without Bryant) quickly allayed those concerns.

"It'd be interesting," Kobe said of an Iverson-Bryant backcourt. "It'd be a lot of competitive juices flowing. I don't mind it. I'm sure you [media] guys would have fun with that.

"I can't see [the Lakers] entertaining that, but for your column's sake, let's entertain that."