Records At A Glance 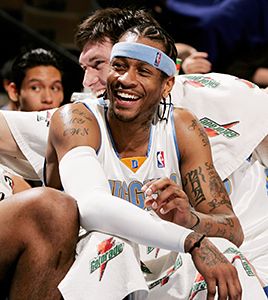 Doug Pensinger/Getty Images
Allen Iverson enjoyed his first win as a Nugget, dropping in 28 points and 13 assists in Denver's 116-105 victory over the Boston Celtics on Tuesday night.

Jordan (Boise, ID): What do you see the Nets doing now that Nenad Krstic is out for the season? Do you see them trading for another big man or just staying with the roster they have? Thanks, Marc!

Marc Stein: The bigger question, at least in my circle, is whether losing Krstic will prompt the Nets to go bold and blow the whole thing up. With Richard Jefferson ailing, too, rallying out of a slow start is not the foregone conclusion it usually is in Jersey, which has to make you wonder if it's time for the Nets to seriously consider breaking up its Big Three before Vince Carter hits free agency.

Dwight Howard turned 21 years old on Dec. 8. This is already his third season in the NBA. After the Magic selected Howard as the No. 1 overall pick in the 2004 NBA Draft, expectations were extremely high. But Howard has made significant progress in each of his seasons in the NBA to exceed those expectations and is currently leading the NBA in rebounding.