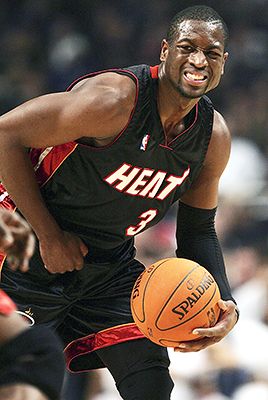 Jonathan Daniel/Getty Images
Dwyane Wade reacts after injuring his right wrist midway through the first quarter. It appeared he got hurt coming off a screen while covering Kirk Hinrich. "It felt like my wrist got pulled out of place. It's pretty painful. It feels like it got yanked out of the socket. I don't have any strength in it. I knew I was done," said Wade.

If there is one thing, above all else, that I would tell people to focus on during the first half of the season, it's this: You need to look at the process, not the results.

This is incredibly difficult because we're a results-oriented society and, like almost any sport, the NBA is a results-oriented business -- wins and losses are the only currency accepted here. But, although coaches will recoil in horror when I say this, if you're trying to gauge the quality of a team, win-loss record is terribly overrated.

Luke (Barrie, Ontario): Raps are only at No. 20? Still behind the Clippers and Blazers after beating both on the road and taking over the Titanic? Drop your bias and show Toronto some love!

Committee's counter: We've said it a million times, Luke. If we really let our biases factor in, Toronto would never drop out of the top three. We love Canada that much.