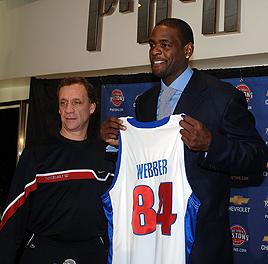 Allen Einstein/NBAE via Getty Images
With his new coach Flip Saunders at his side, Chris Webber shows off his wide receiver worthy 84. He was a great catch for Detroit.

I think Rasheed Wallace will welcome having another effective big man next to him. Rasheed doesn't want to be the go-to man down low, either offensively or defensively. He doesn't want that responsibility. Never has.

That's why he fit in so perfectly in Detroit in the first place. But when Ben Wallace left last summer, Rasheed became the enforcer/face of the Pistons' front line, and he didn't like it. Not that Chris Webber's going to be The Man, but now Rasheed has someone to share the burden/responsibility of giving Detroit a inside presence with.

And when Rasheed's struggles (as he did in going 1-for-11 with 3 points in Monday's loss to Minnesota), Webber will be there to pick up the slack (albeit with jumpers instead of power moves).

Dirk and Bird are the only players in NBA history to have 20 PPG, 9 RPG, and make 75 3-pointers in a single season. Nowitzki has done it four times compared to Bird's three ... and in four fewer seasons.