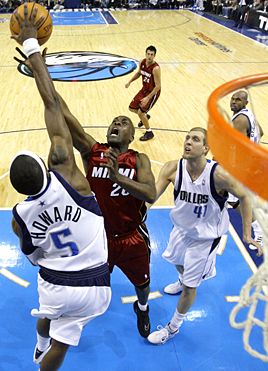 AP Photo/Tony Gutierrez
Denied. Rejected. Dejected. Defeated. Pick your verb after the Mavs smothered the Heat -- their nemeses -- in Dallas, rolling to a 32-point lead and winning 112-100.

Karma Cops
On Thursday, John Hollinger assessed the impact of Dwyane Wade's shoulder injury on
the Heat and the Eastern Conference playoff race.

Here's an excerpt from Hollinger's blog:

If the New Jersey Nets were hoping to get a boost at the trade deadline, they sure got it.

The twist is that, after weeks of rumors involving potential Nets deals, this boost had nothing to do with their own deal making.

Instead, the Nets' playoffs hopes are vastly improved today because of the demise of one of their rivals, Miami, thanks to Dwyane Wade's dislocated shoulder and the impending resignation of coach Pat Riley.

(OK, I'm kidding on that last part. But have you ever seen somebody's karma account evened in such dramatic fashion? Somewhere, Stan Van Gundy is laughing his mustache off.)

The Wizards Of Odd
News, notes, quips and quotes after a typically quirky Wizards win, decided by instant replay when the officials wiped away a potential game-tying shot by Sacramento's John Salmons after Washington blew a 17-point fourth-quarter lead:

"There are different ways to win in this league," Washington coach Eddie Jordan said. "And the most important thing is we won." ...

Gilbert Arenas scored 30 of his 43 points in the first half and finished with an extremely active box score line: 12-for-22 from the field, 3-for-8 from 3-point range, 16-for-17 from the free throw line, seven rebounds, seven assists, three steals and nine of the Wizards' season-high 23 turnovers. ...

Gilbertology update: Arenas offered up his best excuses for dodging reporters this week. He said he left quickly after Tuesday's victory over Minnesota because he wanted to see the movie "Hannibal Rising" -- he shrugged his shoulders in disappointment when asked for a review -- and beat a quick path out of the arena Thursday to prepare for the upcoming road trip. "I have to pack," he said. Why couldn't he pack before the game? Because, Arenas said, a power outage prevented him from getting into his own house, which has a sophisticated security system. Apparently, he's saving "the dog ate my homework" for a later date. ...

Neither team made a move before Thursday's trade deadline. The one player who might have been on the block was Bibby. "I think any time there is speculation, it can affect you," Kings coach Eric Musselman said. "There won't be any speculation now." ...

DeShawn Stevenson, who has been calling himself "Mr. Fifty" to reflect his shooting mark, stayed above break-even by going 8-for-14.