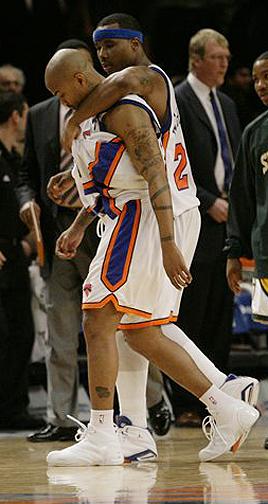 AP Photo/Mary Altaffer
New York Knicks' Quentin Richardson consoles Stephon Marbury (40 points) as he bows his head leaving the court after missing the second free throw that would have tied the game during the fourth quarter. The SuperSonics defeated the Knicks 100-99.

Justin (Philly): The Sixers have been playing great lately and are clearly responding to Maurice Cheeks. Do you see Cheeks coming back next year or will they replace him with Larry Brown?

Marc Stein: The story in coaching circles as I heard it a couple months back, around the time Larry rejoined the franchise and Iverson was traded, is that Brown has an open invitation to return to the Sixers' bench next season if he chooses. In that scenario, if Larry accepts, word is Cheeks would then be offered a front-office position. Only time will tell if Brown wants to make his bench return in Philly, but this much is clear: Larry IS going to coach again someday. No way he goes out with the NY debacle standing as his last hurrah.

Reaction to Kiki Vandeweghe's top choices for Coach of the Year:

Perhaps I'm a little biased being from Canada, or maybe it's that I'm just a little more exposed than our neighbors to the south, but I was a little surprised that Sam Mitchell, a coach that was thought to have little job security at the season's start, wasn't even mentioned among the talk for COY. Sure, Bryan Colangelo (who will probably win exec of the year) deserves much of the credit for the team's success, but Mitchell is the one that has brought together this roster of no-names, and led them to the fourth-best record in the East.
-- Mark (St. John's, Canada)

If Avery Johnson doesn't win Coach of the Year, it will only be because he won it last year. As good as Sloan and Pops have been, the Little General has been better. He improves his team ever time they take the court, sometimes even DURING a game. No one in the league is better at getting the most out of their players. Most of all, in every situation, no matter what they have been up against this year, he always finds a way for them to win.
-- Justin (Denton, TX)