Turning Up The Heat 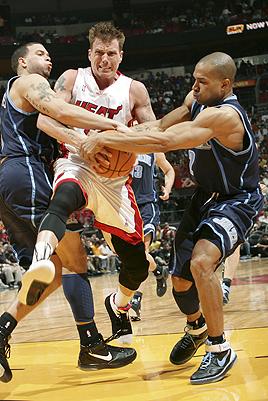 Issac Baldizon /NBAE/Getty Images
Heat guard Jason Williams, surrounded by Jazz guards Deron Williams and Derek Fisher, dropped in 15 to help his team to a 86-84 win. Miami is 8-2 since Dwyane Wade got hurt.

Suns VP David Griffin talks with Chad Ford about the success of his team heading into the playoffs and the stockpile of draft picks Phoenix holds this year:

What a Difference a Day Makes

On Monday Knicks owner Jim Dolan said he was "very pleased to provide him [Isiah Thomas] with this well-deserved extension" and said the team had shown "significant improvement" from last season. Hey, after all, the Knicks were in the playoffs, if the season ended Monday.

Tuesday it was a different story. With the Knicks being idle, they dropped to the ninth spot. The Nets defeated the Hornets and the Pacers lost to the Timberwolves. New Jersey moved up to the seventh seed and the Pacers are now eighth. Indiana holds the tiebreaker over New York so the Knicks are again on the outside looking in.