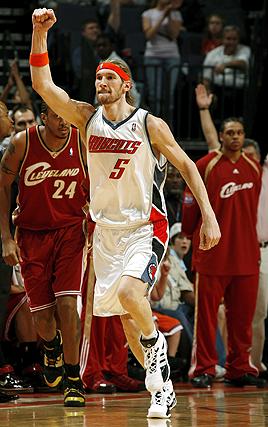 Kent Smith/NBAE/Getty Images
Bobcats forward Walter Herrmann, a 27-year-old rookie from Argentina, scored a career-high 19 points and pulled in 10 rebounds in a 108-100 OT win over the Cavs. Though many thought his name was Herrmann DNP, he has now reached double figures in four straight.

Fran Fraschilla and Chad Ford break down NBA prospects playing in the NCAA Tournament, including a Kansas team loaded with likely draftees. Julian Wright is an acquired taste, plays well in the post but has no jumper. Looks like a Suns-type player, Fraschilla notes. And he calls Brandon Rush "a passive superstar."

The Kings have picked a very bad time to be asking for public funds to build a new arena in Sacramento. They're a dreary, aging, spectacularly unathletic team. The lone exception is Kevin Martin, who doesn't seem to get nearly enough touches in their offense.
-- Ken Rudnick (Deptford, N.J.)

Am I the only one who seems to notice that Ron Artest (though very talented in his own right) completely disrupts the flow of the Kings' offense. It's been proven that they can't win playing defense but they seem to have a fighting chance with Ron Ron on the bench and Bibby and Martin taking the scoring load. Maybe I'm crazy.