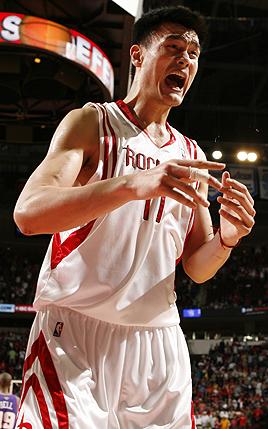 Bill Baptist/NBAE via Getty Images
Yao Ming (34 points, nine rebounds) celebrates his team's win over the Suns. With the win, Houston clinched home-court advantage against the Jazz in first round of the playoffs. "We were so excited when the clock was running to zero. It feels like winning a playoff series," Yao said.

Knicks guard Stephon Marbury addressed the crowd before the game, saying, "You guys stuck with us throughout the whole year." He added, "Us as a team, we're going to be together for next year," and predicted "better things to come." The Knicks are 32-49.

• The Nuggets finish the regular season Wednesday night at San Antonio, where they'll begin the playoffs, but coach George Karl is bringing his team home Thursday and will practice thrice in Denver before returning to Texas on Saturday.

• Carmelo Anthony is set to join Alex English and Kiki Vandeweghe as the only Nuggets to average at least 29 points per game.


Dime Mailbag: Something For Joey

For Sunday's worst you should have put Joey Crawford rather than Sam Cassell. A second tech on Duncan, for laughing ... the league should want Duncan to show some emotion. It's not like he was acting like 'Sheed. He was on the other side of the court when Crawford gave him the tech. Anyways isn't laughter good for the soul or something? Crawford should try it some time when his blood boils over. He could have just laughed too. Well, he could have tried anyway. Sad twist in what could have been a really good game.