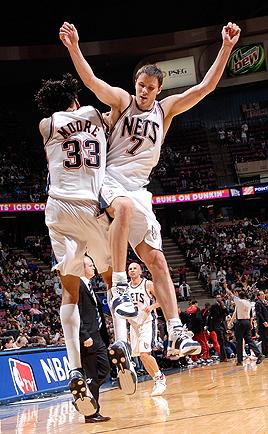 David Dow/NBAE/Getty Images
Mikki Moore and Bostjan Nachbar, once afterthoughts in New Jersey but now mainstays, celebrate after Nachbar hit a 3-pointer in the fourth quarter of the Nets' 106-97 win over Chicago.

LeBron James led the Cavaliers to the second seed in the East with 24 points and nine assists in a 109-96 win over Milwaukee. But with the nine assists, King James nudged his season average to 6.03 assists per game -- and he qualified for yet another distinction. It was the third straight season in which James has averaged at least 27 points, six rebounds and six assists per game. The only other player in NBA history who has done that is Oscar Robertson -- but The Big O did it in each of his first eight seasons as a pro!

Your comment that it was a good idea for Dallas to sit its starters against Golden State is bogus. If that were the case, then there would have been no reason to play the starters for the full game two days before against San Antonio.

Rather, it should be seen for it really was -- an old player (Avery) giving a gift to his old coach (Nelson). It is a sad reflection on the integrity of the game, and is no different than tanking games last year for playoff seeding, where the NBA changed the rule this year. Dallas and Avery Johnson should be fined by the league for this blatant demonstration of favoritism.