T-Mac Attack
McGrady pours in 23 in second half vs. Jazz 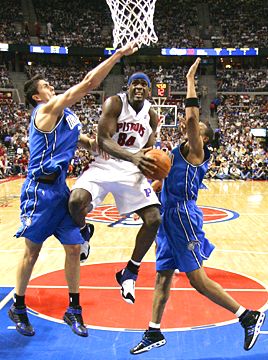 David Dow/NBAE/Getty Images
C-Webb with hang time? He's no MJ, but he showed he still has a little junk in his trunk with this spinner off the glass.


Elias Says
Dwight Howard had 19 rebounds in his first postseason game on Saturday.

The Cavaliers joined the NBA in 1970-71 and have never been to the NBA Finals, a drought of 35 seasons that could extend to 36 this year.

That drought is the second-longest among Eastern Conference teams and fourth longest in the NBA (and will be tied for third if the Cavaliers don't reach the Finals this season).