Champs In A Hole
Bulls take 2-0 lead on Heat

No Sweat For Suns 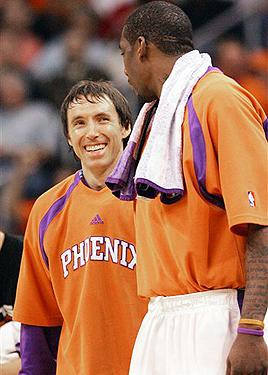 E-40: Tell me how Dallas can stop my Warriors without a legit low-post scoring threat to slow the pace of the game? By the way, GSW will not shoot that poorly in the next game.

Marc Stein: You're right, E. It's maybe the biggest issue on a growing list of Mavs problems. Dirk Nowitzki can't post lower because they'll just keep fronting him and they don't have another low-post scoring option. Jerry Stackhouse and Josh Howard are next in line, but neither one of them is going to punish the Warriors for playing so small. The Warriors come unstuck when someone punishes them down low.

Dan Patrick talked with Warriors coach Don Nelson about Game 2. Nellie had some fun with his team's underdog status. To wit:

How will the Mavs change their approach?

"We were just lucky that first game. They didn't shoot very well, and we didn't either actually. But for whatever reason, we played a little bit better than they did," he said. "I think they'll do just fine the second game. They'll be dominant as they should be and they'll mop us up.

"We have a better chance to get hit by lightning than to win tomorrow night."

But the Warriors have beaten the Mavs six straight.

"I'm just the luckiest guy in the world."

• Nellie: Mavs will crush us