Next Stop: Phoenix
Spurs finish the Nuggets in 5 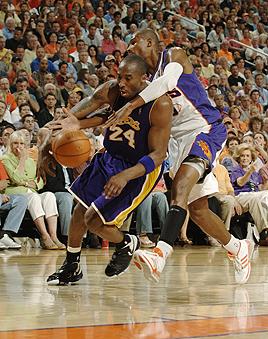 Barry Gossage/NBAE via Getty Images
Leandro Barbosa and the Suns had Kobe Bryant pretty well covered in this series.

Tim Duncan scored 23 points, grabbed 12 rebounds and dished out five assists in the Spurs' series-ending victory over the Nuggets.

It was the 22nd career 20/10/5 game in Duncan's playoff career, tying him with Shaquille O'Neal for the most such games among active players.

If the Warriors beat the Mavericks on Thursday night and advance to the conference semifinals, here are some important notes about why this would be the biggest postseason series upset in NBA history.

• In 2003, the first round of the NBA playoffs went to a best-of-seven format. While this would be the third time that a No. 8 seed has defeated a No. 1 seed, it would be the first time that this has happened in a seven-game series. First-round series had been best-of-five games since the 16-team postseason format was instituted in the 1983-84 season.

Here's the biggest first-round upsets since that season . . .