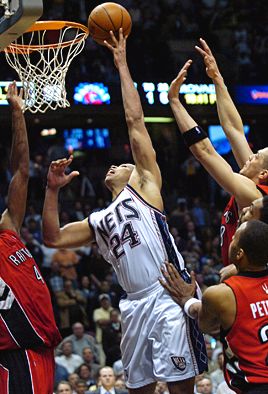 AP Photo/Bill Kostroun
Surprise No. 1: Richard Jefferson takes the Nets' final shot. Surprise No. 2: He uses his left hand. And that, not too surprisingly, left the Raps in the land of playoff extinction.

Andrei Kirilekno came up big in Game 6. Not only did he do a great job defensively, particularly with late blocks on Yao and Tracy McGrady, but gained confidence offensively, which poses a dilemma for Houston.

McGrady is Houston's weakest defender and they have been fortunate to be able to hide him on the non-aggressive Kirilenko this series. If AK-47 shoots well and scores in Game 7 it will difficult for Houston to adjust.