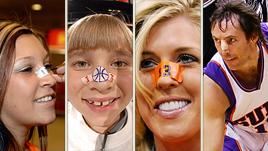 Getty Images
Suns fans came out in support of their hero with the busted up schnozz during Tuesday's Game 2.


'This Is San Antonio's Tournament To Lose'

With Dallas out of the picture and the Spurs already seizing home-court advantage from the Suns, San Antonio has to be considered an overwhelming favorite right now to win the championship. Consider this: The Spurs played the No. 2 team on this list, Golden State, twice after Baron Davis came back in March. Keep in mind the Warriors are 18-4 in their other games with Davis since then. But against the Spurs they lost twice by a combined total of 50 points.

Not that I needed any convincing after watching the Spurs methodically rip the heart out of a very good Denver team last week, but the numbers back up what I've been thinking since training camp tipped off -- this is San Antonio's tournament to lose. And thus far, the Spurs don't seem inclined to lose it.

Cleveland has won each of its first six games of the 2007 NBA playoffs, joining Detroit as the only two teams to start these playoffs with six straight wins. From 1994 to 2006 six teams started the playoffs with a winning streak of at least six games, only one of those teams made it to the NBA Finals that year. The Lakers won their first 11 games of the 2001 playoffs on their way to the NBA championship. The five teams that failed to reach the Finals: Orlando in 1996 (won first six), Indiana in 1999 (seven), San Antonio in 2004 (six), Indiana in 2004 (six) and Miami in 2005 (eight).