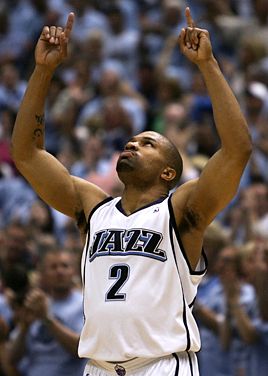 Harry How/Getty Images
Derek Fisher got a late start in the game, arriving during the third quarter, but his presence helped deliver a Jazz victory against his former Warriors teammates.

Chip (Cleveland): Again, you still say you liked the Nets on paper before the series. You cannot defend that. Like I said, defense, rebounding and the superstar. Where do the Nets show up better on paper?

David Thorpe: It's not about all season. With Jefferson and Nachbar playing so well, the Nets had four of the five best perimeter players in the series. They still do, but their bigs have been atrocious. And don't forget I still predicted the Cavs to win the series.

Carlos Boozer (30 points) and Mehmet Okur (18 rebounds) posted the gaudy numbers in the Jazz' 127-117 overtime win over the Warriors.