Nash In A Flash
Steve Nash dishes Suns past Spurs 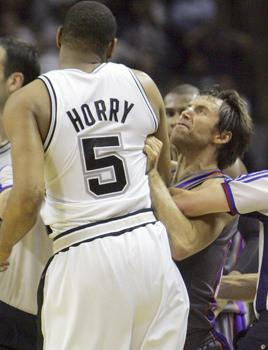 AP Photo/LM Otero
Steve Nash confronts the man who just committed a Flagrant 2 foul on his person (see below for flagrant foul details).

Over the last 10 years, the Spurs have been one of the best teams in the NBA. Their 82 playoff wins tie the Lakers for the most in the league in that time. They can eclipse the Lakers with a win in Game 5.

They have won 19 playoff series, which is second in the NBA in that time. And they have won three titles in that span, which is tied for the most in the league.

Smithsonian (D.C.): How 'bout them Jazz?! If they make it to the Western Conference finals, do you see them trying to move AK-47 or Mehmet Okur for a 2-guard, or will they stick with the same roster?

John Hollinger: If they make the WCF I think they're much less likely to try to do any major surgery in the offseason. Biggest need remains a 3-point threat, Gordan Giricek has never quite answered the bell there.

Jake (Oregon): Now that the Jazz are in control against Golden State, I've been thinking in hypotheticals. How would a Jazz-Mavs series have gone?

John Hollinger: I was thinking about the same thing today. Jazz probably would have put AK on Dirk Nowitzki, but Carlos Boozer would be having a much more difficult time against DeSagana Diop and Erick Dampier. Probably a lot slower paced and more physical, but the way Utah and Dallas were going by the end of round 1, would it be that big a shock if the Jazz were up 3-1 on Dallas too?

RL (N.Y.): What adjustments do you see Don Nelson making before their next game?

John Hollinger: For some reason, the Warriors had trouble taking advantage of Harpring's matchup on D Sunday night, something they had great success with in Games 2 and 3. But biggest thing is Nellie has to find a new defensive wrinkle ... maybe he picks up full court or traps half court, something to raise the energy and get more deflections that lead out to easy buckets.