Manu Of The Hour 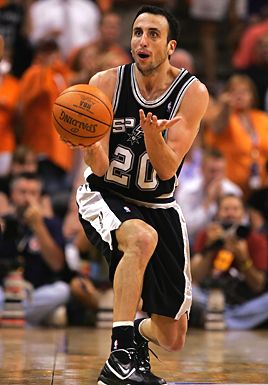 Lisa Blumenfeld/Getty Images
Don't be too incredulous, Manu Ginobili. You definitely delivered for the Spurs in Game 5.

Suns fans apparently tried to give their team a homecourt advantage long before filing into US Airways Center Wednesday night. A bogus bomb threat was made at the Spurs' team hotel around 9 p.m. Tuesday night, prompting local police to do a room-to-room sweep of the property.

Spurs guard Brent Barry made light of the incident before tipoff on Wednesday. "I couldn't understand it, because Suns fans are too classy for that," he said, tongue lodged firmly in cheek. "But I walked through the lobby and saw [TNT's] Craig Sager. Then it all came together. They were trying to blow up Sager. And who would have a problem with that?" Barry, perhaps angling for the league's good sportsmanship award, forewarned Sager about his intention to blame the threat on him.

• The Phoenix crowd came bearing plenty of signs to express their disfavor with the NBA's decision to suspend both Amare Stoudemire and Boris Diaw for leaving the bench in the final minutes of Game 4, but most were pretty pedestrian. "A Horry-ble Decision" and "Free Amare" were the best of them. Local silk screeners, however, did themselves proud, producing a very fetching orange shirt that read, "Stu Sucks," in reference to NBA VP of Operations Stu Jackson, and a white T-shirt with black lettering that read, "Dirty Horry." (Think Clint Eastwood.)

• Steve Nash sounded thoroughly disappointed as he sat at the podium and rehashed the close loss, but he brightened, if only for a moment, when a reporter's cell phone rang in the middle of the press conference. "I hope she's hot," said Nash.

The Bulls have come back from the brink of elimination to force a Game 6 at home, becoming just the ninth team in NBA history to go from down 3-0 to 3-2 in a best-of-seven series. They are also the fifth team to accomplish the feat since the current playoff format began in 1984.