The King's Road To Thursday's Heroics
AUBURN HILLS, Mich. -- When he was 15-years-old and his team was trailing at the half of an early-round state high school tournament game in a tiny gym in Wooster, Ohio, LeBron James needed to take over. He scored the first 15 points of the second half and the rest was history.

When he was 18-years-old and playing his final high school game, in front of a sellout crowd at Ohio State University, his team was in a dogfight to win the state championship game and a mythical national championship. He scored 25 of his team's 40 points and the rest was history.

When he played his first professional game in a boisterous environment far away from home in Sacramento, it was in front of millions of skeptic eyes. He scored 25 points, the most ever for a preps-to-pros debut, and the rest was history. So many gyms, layers of challenges and moments of failure led James to the mindset he took into the fourth quarter of Game 5 of the Eastern Conference finals Thursday night. Each had its own significance, one building upon another, that led a 22-year-old freakish body to become matched with a hyper-developed basketball soul that may be just starting to bloom.

Thursday night wasn't just about scoring 48 points in a conference finals game on the road. It wasn't even about scoring his team's last 25 points, including every tally in both overtimes. It was about applying the knowledge acquired over years of demanding and high-profile challenges.

Greatness On Display
The King rules The Palace 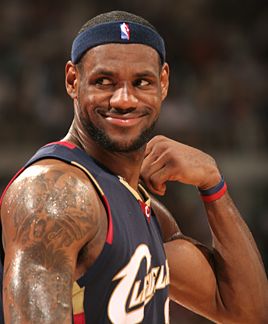 D. Lippitt/Einstein/NBAE via Getty Images
LeBron James, who scored his team's last 25 points in Game 5, just might have more of these epic performances in him as the years roll on.

Some news and notes from Chris Sheridan in Detroit ...

• Now that were seeing more and more of Daniel Gibson, it should be noted that he got his nickname "Boobie" from his mother, who used to call him that when he'd come home crying after playing rough with bigger, older kids.

• That patch of hair on the back of Drew Gooden's head? It's an Oakland thing.

• Lots of people have been watching the video on YouTube of Rasheed Wallace angrily tossing his uniform jersey over his shoulder and into the face of teammate Will Blalock.

What wasn't captured on camera was a scene I witnessed a few minutes later in the Pistons locker room, Sheed slamming the door to the trainer's room so hard that it knocked a bunch of dust and dirt out of a nearby overhead light fixture. Assistant coach Igor Kokoskov was standing beneath the light and got showered with the debris.

• The close proximity of the two cities represented in the Eastern Conference finals has enabled plenty of fans of the visiting teams to travel into enemy territory. Cleveland fans were having a ball the other night taunting people in Pistons gear with a vulgar modified version of Detroit PA announcer John Mason's signature call: "Deeeee-troit Basketball."

• An update on Kid Rock's '62 Chevy Impala convertible that I saw on the loading dock at The Palace earlier in the playoffs: I spoke to Kid out on the dock at halftime of Game 2, and he told me he got that car from the father of "Monster Garage" host Jesse James.

We discussed Kid Rock's Impala while admiring Pistons broadcaster Rick Mahorn's vintage 1971 Oldsmobile 442 ragtop, and we both wondered why we don't see more classic cars tooling around the Detroit area, being as they were built here.

Kid Rock's ride for Game 2, by the way, was a 1979 Trans Am with only 2,500 miles on the odometer that he said he found in Chicago a couple years ago. My ride is a 2007 Pontiac Grand Prix rental car that cost an astounding $57.28 to refill with gas, a personal record.

The Cavaliers are in the Conference Finals for the third time in franchise history, but Thursday they departed from the blueprint of their first two appearances.