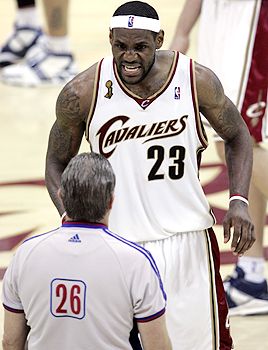 AP Photo/Eric Gay
LeBron James communicates his displeasure to referee Bob Delaney, letting him know he believes he was fouled before his final shot.

Cavs: At the start of the fourth quarter, down 5, the Cavs were coming off a dismal third in which they scored just 12 points and shot 26 percent from the field.

That's when veteran Eric Snow told his teammates, who were sulking on the bench, "Hey, you've gotta look like you're gonna win -- not like you just missed a shot. Forget about those missed shots. Don't feel sorry for yourself. You're in the NBA Finals. It's not gonna be easy, but we can get it done!"

Spurs: In a timeout with 5:24 left in the second quarter, the Cavs leading 32-28 and Tim Duncan having just picked up his third foul, Bruce Bowen shouted at his teammates: "We know we've got to deal with adversity. That's what this is right now! We can get through this!"

With Duncan on the bench the remainder of the period, the Spurs outscored the Cavs 12-6 to take a 40-38 halftime lead.

Catch the next Cavs-Spurs game starting Thursday at 8:20 p.m. ET on ESPN Radio.

Desperate for a measure to shake up his lethargic offense, Cavs coach Mike Brown did what many were calling for: He gave more playing time to rookie Daniel Gibson.

In a philosophical shift, Brown deactivated wounded point guard Larry Hughes and elevated Gibson to the starting lineup for Game 3.

While Brown was wary of messing with Gibson's rhythm of coming off the bench, he was getting very little production out of Hughes. Gibson had shown extreme poise throughout the playoffs, first scoring 31 points in the Eastern Conference finals clincher and then averaging 15.5 points on 59 percent shooting in the first two games of the NBA Finals. So Brown pulled the trigger.

Gibson used his quickness to help slow down Spurs' guard Tony Parker for much of the game and relieved LeBron James of picking up the bulk of the assignment, as was the plan with Hughes in the lineup. But his trusty jumper abandoned him completely in the heat of being a starter for the first time since February.

He went just 1-of-10 shooting and 0-of-5 on 3-pointers to finish with just two points. Quite coincidentally, those are the same numbers Hughes tabulated in the series' first two games.

"I had a gut feel and I went with starting him, and I though he did some good things out on the floor," Brown said. "His shot just didn't go down."

Unlike past games when Gibson usually waited for an open shot to develop, usually off a feed from a flooded James or from a drive-and-kick, Gibson several times tried to force the issue over bigger defenders.

The Spurs made it tougher on him, as well, a few times even double-teaming the normal double-team breaker.

Those contested looks sure didn't go in, and then neither did his open shots later in the game.

At one point, after a foul stopped play, Gibson tried to squeeze off a practice 3-pointer from the top of the key. It was an airball.

Even with Hall of Famer Jim Brown sitting courtside for good luck -- a legendary reminder of the pre-Super Bowl NFL championship won in 1964 by the Cleveland Browns, the last champion in this long-suffering city -- James' gang couldn't reward the desperate locals with a solitary, consolation stifling of Tony Parker and Eva Longoria. Not even on a night when Tim Duncan didn't attempt a single free throw until the final quarter … and when Manu Ginobili was held scoreless until the final 10 seconds … and when LeBron finally found a way to get to the rim occasionally.

More than the hobbling Larry Hughes' inability to play or Daniel "Boobie" Gibson going flat in the promotion to the starting lineup so many were calling for, Cleveland's big problem was the opposition. The Spurs simply -- inevitably -- came up with alternative solutions.