Driven By Duncan
Spurs step to the four 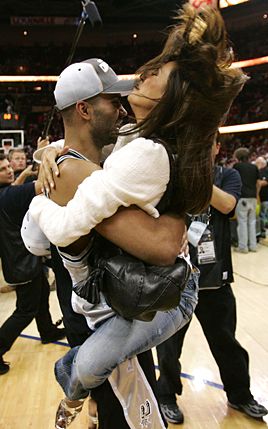 AP Photo/Eric Gay
Tony Parker has the NBA Finals MVP award, and the adoration of Eva Longoria, whom you just may have seen at her fiancé's games.

Cavs: What I saw and heard on the Cavaliers' bench tonight may have been the most entertaining all series.

LeBron James was being treated for a court burn on his left knee -- the burn was about the size of a dime, the skin was gone, and it was bleeding.

Cavs trainer Max Benton was cleaning the wound while LeBron continued to watch the game. But when Benton put an iodine-like liquid on LeBron's knee, the King almost jumped out of his chair! He said, "Hey, man! What are you doing? You've got to tell me before you put that s--- on me! That hurts!"

Benton wanted to continue, but LeBron said, "No way, that's enough of that. Just put the bandage on and wrap it up, I'll be fine."

Spurs: After five unforced turnovers led to an 18-16 Cavs' lead at the end of the first quarter, Spurs coach Gregg Popovich ripped into his team in general and Manu Ginobili in particular: "We're throwing the ball all over the gym! Get your heads out of your asses! We're playing like s---!" Ginobili, who had two points, would finish with a game-high 27.


Chairman Of The Bored

Four quick questions with Spurs owner Peter Holt, who has presided over all four of San Antonio's championships:

Q: As we ask every Spur, does it bother you that your team -- and Tim Duncan specifically -- hasn't generated the respect we've seen many other champions get?

Q: So you can even ignore the "Spurs are boring" stuff?

A: As long as we keep winning, please, let us be boring.

Q: How much did all the talk about the Spurs being "dirty" in the Phoenix series spoil that series or anything that's happened since?

A: I guess it would have bothered me more if I hadn't been in this business for so long. It all calmed down in a couple days. That's not who we are. We are still who we are and who we've always been.

To Spurs forward Robert Horry, who collected his seventh NBA championship, there have only been two dynasties in league history: Bill Russell's Celtics, who won 11 titles in 13 years, and Michael Jordan's Bulls, who won 6 in 8 years (or really 6 in 6 because of MJ's first retirement).

"A dynasty is a team that's been dominant over a 10-year span,'' Horry said. "Anything else, is too short. The Shaq/Kobe Lakers who won three straight? That was too short.''

I like Horry's standards, but I'm a little more lenient. I think the Showtime Lakers of Magic and Kareem, who won five titles in nine years, were definitely a dynasty, and I'll even throw Bird's Celtics in the mix.

But Bird's Celtics only won three titles in his 13 seasons. We speak of them as a dynasty because they had so many all-time greats, but they certainly weren't as dominant as the Shaq/Kobe Lakers were for those three seasons.

Still, with perhaps the best frontline ever (Bird, Kevin McHale, Robert Parish), those Celtics have to be considered dynastic.

Horry thinks these Spurs would have topped those great Lakers and Celtics teams of the '80s, but all that bling has blinded him.

I believe the Magic/Kareem Lakers were the best team of all time, even better than MJ's Bulls. They definitely had the best point guard of all time and arguably the best center. Those are the two main positions on the floor.

Although I don't put these Spurs on the same level as the Lakers and Celtics of the '80s or the Bulls of the '90s, I do consider them a dynasty.

Four titles in nine years is outstanding. I don't give much credence to the argument that they haven't won back-to-back championships. That doesn't diminish how great they've been over the past decade.

And let's not forget, with Duncan having two or three more years left at this high level and 25-year-old Tony Parker getting better each year, the Spurs should definitely win one more ring. Two's not out of the question.