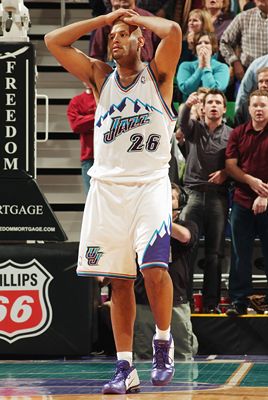 Kent Horner/Getty Images
John Amaechi experienced some lonely times during his NBA career while trying to keep his sexual orientation a secret.

The Bulls and Celtics are the two teams that still come up most in connection with a potential Pau Gasol swap, with NBA front-office sources continuing to describe Chicago as Memphis' preferred trade partner. By far.

Yet the prevailing sentiment in circulation also still suggests that there won't be a Pau deal before the Feb. 22 trading deadline. The following tidbit obviously doesn't rule out a buzzer-beating trade, but but I'm told Grizz president Jerry West recently sent a note to various GM counterparts around the league to let everyone know he'd be in Europe scouting for a couple weeks. Which didn't exactly make anything sound imminent.

One rival executive describes the Gasol situation as a big domino that could hold up other (smaller) deals around the league if doesn't happen until close to the deadline or if it drags into May or June. Another executive disagrees, saying that the limited number of teams (at least for now) in the Gasol hunt should ease any blockade effect. Yet another executive contends that West's off-to-Europe announcement was surely intended to confuse everyone.

What's clear is that the Grizzlies, as discussed in Tuesday's chat, aren't operating with the same sort of urgency we saw from Philadelphia in Allen Iverson's case.

The Sixers, as you surely remember, banished Iverson to the inactive list in response to his trade demand and vowed to keep him there until they could consummate a deal. Gasol is obviously still playing for the Grizz, which does expose them to uncomfortable daily questions about the Spaniard's future ... but overshadows other obvious uncomfortable questions about owner Michael Heisley's search for new buyers and West's potential retirement at season's end.

If this is indeed West's farewell season in Graceland, it would seem safe to assume he's not going to rush into a trade in the next 13 days that he doesn't feel comfortable with. Common sense also suggests that the Grizz (and several other teams) might prefer to wait until May to see how high they finish in the draft lottery. Maybe they'll want to keep Gasol to partner their draft pick if it's high enough. Or perhaps they'll be more motivated to swap with a Chicago or Boston when they know exactly where those teams are drafting.

Of course, it's no surprise that trading with the Bulls is West's preference, especially if the Celtics continue to bestow "untouchable" status on Al Jefferson as they did during the Iverson Sweepstakes. Chicago will have first crack at any All-Star talent who becomes available if it wants to be a bidder because of its deep reserve of young assets. Even if the Bulls hold firm on their refusal to part with more of the one from tag team of Ben Gordon or Luol Deng, they've got P.J. Brown's expiring contract to anchor a deal and desirable rookies in Tyrus Thomas and Thabo Sefalosha to round out any package.

If Chicago decides to make a serious Pau push, Boston can only outbid the Grizz by packaging Jefferson with a future first-round pick and Theo Ratliff's contract, which expires after next season and which is mostly being covered by insurance payments this season. But the Celts have shown little inclination to even consider giving that much away for Gasol.

Every team in the East awoke Friday having played between 48 and 50 games.

Guess how many of those 15 teams were on 50-win paces?

Yup. Just one: Detroit is now on course to finish 51-31 thanks to its recent 9-3 uptick since newly acquired Chris Webber became a starter.

To get his freedom from the Grizzlies so he could sign with Miami, Eddie Jones gave back $833,722 in his contract buyout with Memphis, according to official contract figures obtained by ESPN.com.

Q: How do you rate your rookie season so far?

A: It's going all right. A little up and down. The biggest thing for me personally is being more consistent and trying to make a positive contribution every night. I feel like I'm playing better defense. I know I'm not a stopper, but guys are not getting whatever they want [against] me.

Q: I'm guessing I'm not alone when I say I'm surprised to see you below 40 percent as a shooter. How concerned are you about your (.381) shooting percentage?

A: You think you can prepare for [the transition], but it's definitely different. Going in you think: "82 games, that's a cinch." But it's definitely a lot different than college. The level is obviously a lot higher and the speed of the game is a lot faster. But I think people understand this stuff comes with time. I'm getting better defensively and the other stuff will come.

Q: You've clearly received more criticism than any other rookie this season and you've been coming off the bench for about a month. Have those things been difficult to accept?

A: The coaches are happy with me, for the most part, and I'm happy with myself. A lot of it is how much attention I got last year and it's carrying over now. People are trying to find a way to bring about negative stuff, which is understandable at this level. It's a high-dollar, marquee league. You've got to be productive. Everyone is going to write their opinion and try to dissect you. I don't take offense to it.

Q: Who would you say is leading the Rookie of the Year race right now?

A: I think [Toronto's Andrea] Bargnani is starting to play well and Brandon [Portland's Brandon Roy] is playing really well. But I could have told you that from Day 1. He didn't have as much attention as I did last year, but I've known Brandon for quite some time, growing up in the same state, so I knew he was going to be good.

Q: And how do you fit into that race?

A: It would obviously be a great honor to win something like that. Hopefully I'm up there, but my goal is to just try to earn a solid, steady job in this league.

"Why do we still do all the blood stuff? Maybe this is one more indication that it's time to walk away from whatever they call it ... the infection-control thing."

Mavericks owner Mark Cuban, suggesting that one way for the NBA to prove its open-mindedness in the wake of John Amaechi declaring his homosexuality would be outlawing the rule that forces the game to be stopped whenever a player is bleeding.

It's a rule, of course, that was instituted by the league in the wake of Magic Johnson's AIDS announcement in 1991.

It's one of the readers' favorites and we do it every week: Trot out five (or so) responses to the latest edition of my NBA Power Rankings to make sure you have your say.

Straight from the rankings mailbag:

Ken (Orlando): Seriously, Marc: Why do you hate the Magic? You didn't give them any credit when they got off to that great start and now that they've been hit with key injuries and struggling, you're ready to jump on them like you always have. How can you have a team that is above .500 below the BOBCATS in your rankings? I want to know the reason.

Committee's counter: Didn't we have the Magic up at No. 3 for a time during their 13-4 launch? Didn't we also vault the Magic into the top 10 late last season as a reward for their strong finish, even though they had run out of time to rally into a playoff spot? Doesn't sound like such a hateful committee, does it? If you're going to take the time to write in with accusations, let's make sure you do your research.

You also conveniently declined to mention how your Magic have been struggling for a long time now: 12-21 as of Friday morning since the big start. Sorry, Ken. Orlando has more than justified its plummet.