Burdened by foul trouble, LeBron didn't score in 12 first-half minutes. The last time he went scoreless in a half? Halloween 2007 versus Dallas. Despite draining a couple of long J's after halftime, he finished 2-for-8 in the paint. Aside from a last-ditch effort, James was absent during key stretches when the Heat desperately needed a lift.

He was jittery and, at times, impatient, but credit Wade for concentrating his shot attempts in high-efficiency areas -- aggressive moves into the paint and clean looks behind the arc. Wade made some big plays down the stretch (threading the needle to Bosh on a slip screen, then a runner in the lane) to keep the Heat close.

The Heat established their offensive rhythm early with Bosh at the elbow and allowed the offense to flow through him. Bosh wasn't armed with his silkiest stroke on Monday, but his production helped keep the Heat in the game during the Mavs' jackrabbit start. Defensively, Bosh had some nice coverages, but also was an occasional blow-by victim off high screens.

The Inside Job
GRADED

A team endowed with the two most dynamic attackers in the league shouldn't have to rely on the long 2-pointer as the primary source of its offense. When James and Wade find fool's gold, the Heat's failure to generate shots inside goes virtually unnoticed. But against an elite defense like Dallas, the Heat's ill-advised shot selection is fatal.

Dallas has been a smart, veteran outfit, but the Mavs have added some flourishes that elevate them from competent to creative. They have bolstered their read-and-react offense with some nasty, hard-to-defend sets. Their defensive game plan -- including their aggressive trap-happy zone -- places a force field around the paint. Something else -- they're also a lot more fun to watch! 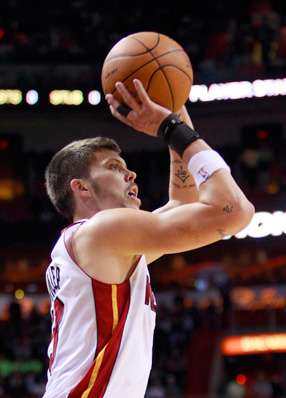 Mike Miller made his debut for the Heat, missing four 3-point shots and pulling down four rebounds in four minutes of action.

Even though the Mavericks didn't show their zone frequently tonight, the Heat settled for long jumpers at the expense of attacking the basket. As a result, the Heat took six more 3-pointers (31) than free throws (25). The 31 3-point attempts were a season-high for the Heat and the most since the 2008-09 season. The Heat have now lost two of the three games in which they shot more 3s than freebies, with the other loss coming against Memphis.