It was an odd game for James. He spent a fair amount of his time on the attack, yet he seemed passive for extended stretches of the game. Karmic implications aside, the biggest moment of his night came when he tweaked his ankle in the fourth quarter, then summarily drained a 3. But he didn't score again until the game was on ice.

The facilities crew at Staples Center is currently repainting the floor after Wade wore out the lane. He didn't take a shot outside of 9 feet until the waning minutes of the third quarter and single-handedly decimated the Clippers' zone in the second quarter to get the Heat back into the game.

His normally reliable jumper has been experiencing a cold snap, so Bosh did what any struggling shooter should -- he looked for points at close range and at the stripe, where he earned the majority of his points. Defensively, Bosh worked hard against Blake Griffin on the block and bodied up well when the ball went up, keeping the rook at bay on the offensive glass.

This might have been the Clippers' playoff game and merely the hump game on Miami's longest road trip of the season, but the Heat were outhustled by a team that wanted it more. With the exception of Wade, there wasn't another Heater who asserted himself when Miami needed a boost. The absence of impact players should never be an issue for this team.

For Clippers fans, this win was the realization of every promise. The Clips electrified Staples Center with a 44-point first quarter, then never backed down even as their lead evaporated. The Heat couldn't answer Griffin and Eric Gordon's aggressiveness, and lo and behold, Baron Davis turned back the clock and was the most willful playmaker on the court. 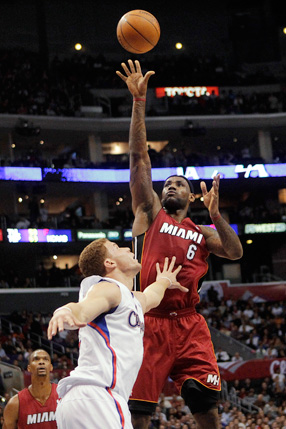 LeBron James and the Heat couldn't get over the top on Blake Griffin and the determined Clippers.

The Heat entered Wednesday night's game with the league's lowest opponent shooting percentage (as measured by effective field goal percentage), but the Clippers weren't impressed. Led by Blake Griffin, the Clippers posted a 53.6 eFG%, marking the fourth-worst performance by the Heat on the season. With the loss, the Heat now are 3-8 when the opponent posts an eFG% better than 50.