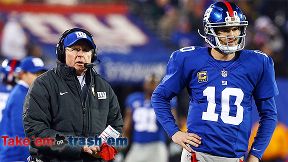 The New York Giants haven't had a season this disappointing in quite a while. For the first time since 2004, which was Tom Coughlin's and Eli Manning's first season with the team, they finished under .500. They also missed the playoffs for the fourth time in five years.

A team that didn't have a two-time Super Bowl-winning coaching staff and core would be in line for a significant overhaul under those circumstances. But while the Giants have a lot of offseason questions to answer, major changes at the top still seem unlikely.

Giants ownership believes in continuity and takes pride in avoiding rash decisions, even (especially?) amid bitter disappointment. So they're more likely to approach the offseason precisely than angrily.

But you're not the Giants' owners. You are their fans. And fans get to vent, and be as angry as they want to be. So with that in mind, we present our annual Giants "Take 'em or Trash 'em" feature, in which you, the fan, get to vote on which players and coaches you want back in 2014 and which ones you'd rather see gone.