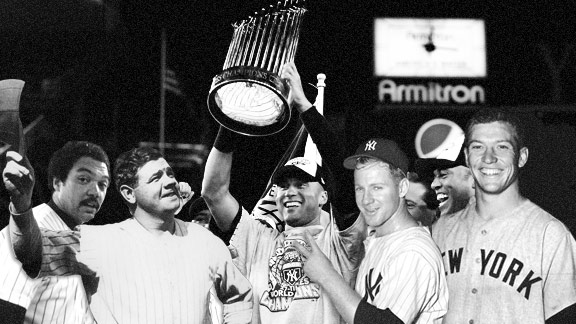 Editor's note: Early in April we asked ESPNNewYork.com users to select the all-time Yankees team. Between now and Friday we'll be simulating a series between the Yankees team and the all-time Red Sox team that was selected by ESPNBoston.com.

Who's your daddy, Boston?

That's right, it's still the Yankees.

It took six games, but history fittingly repeated itself as the Bombers again broke Beantown's heart, rallying for five eighth-inning runs off -- who else? -- Pedro Martinez, plus reliever Lefty Grove, to win ESPN.com's simulated series.

The all-time Yankees, as selected by the fans, beat the all-time Red Sox 5-1 at Fenway Park in the sixth and final game of the series -- extending their real-life dominance into the digital realm.

The Yankees were down 1-0 after a fifth-inning RBI double by Wade Boggs until Joe DiMaggio pounded a Martinez pitch over the Green Monster with one out in the eighth. After Martinez (0-1) walked Yogi Berra, Red Sox skipper Terry Francona, who's sure to draw comparisons to Grady Little, pulled his starter from the game a little too late. The sleeping giant had awoken, and after Grove walked Bernie Williams, Derek Jeter's two-run double put the Bombers up for good.

Ron Guidry (1-0) got the win, finishing the series with a 1.93 ERA in 14 innings. Babe Ruth went 0-for-4 in Game 6 but finished as the hitting star of the series, batting a team-high .348 with a series-high four home runs and eight RBIs.

In the bottom of the ninth, Mariano Rivera finally made his first appearance of the series -- and as a Tris Speaker fly ball landed in left fielder Mickey Mantle's glove for the third out, the Yankees were champs again.

All is right with the virtual world.

Top of the 1st inning, Yankees batting
-- Jeter struck out
-- Mantle lined a single to center
-- Ruth popped out to short
-- Gehrig lined a single up the middle, Mantle to second
-- AlRodriguez struck out

Top of the 4th inning, Yankees batting
-- Ruth walked
-- Gehrig flied out to right
-- AlRodriguez grounded into a double play, Pedroia to Garciaparra to Foxx

Bottom of the 4th inning, Red Sox batting
-- Pedroia lined out to short
-- Garciaparra lined a single to shallow center
-- TWilliams grounded out to second, Garciaparra to second
-- Ramirez walked
-- Foxx struck out

Bottom of the 7th inning, Red Sox batting
-- Ortiz flied out to center
-- Speaker to first on an error by the shortstop Jeter
-- Fisk lined out to left
-- Boggs popped out to center