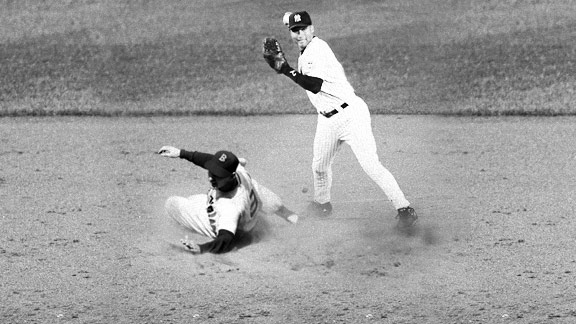 Editor's note: In early April we asked ESPNBoston.com users to select the All-Time Red Sox team. Between now and Friday we'll be simulating a best-of-seven series between the Red Sox team and the All-Time Yankees team that was selected by ESPNNewYork.com.

The New York Yankees All-Time team jumped out to a 1-0 series lead over the Boston Red Sox All-Time team, taking the opening game 13-7 behind a balanced offensive attack and a solid start from Whitey Ford. Every player in the Yankees' lineup had an RBI, while Ford went seven innings, striking out four and allowing four runs.

The Yankees wasted little time getting on the board against Red Sox starter Cy Young, scoring two runs in the top of the first inning to take a lead that they would never relinquish.

The Yankees opened the game up in the fourth inning, taking a 7-1 lead that was highlighted by Reggie Jackson's two-run homer. The Yankees scored two more time in the fifth to take their biggest lead of the game, 9-1.

Boston scored three runs in the bottom of the fifth to cut the lead to 9-4, but the Red Sox would never get closer than that.

Babe Ruth and Mickey Mantle also homered for the Yankees, who pounded out 13 hits for the game.

Shortstop Nomar Garciaparra was the main source of offense for the Red Sox, collecting four hits (one homer) and driving in four runs. On the mound, Young was chased after three-plus innings, giving up seven hits and five runs.

The Red Sox will turn to Pedro Martinez in Game 2, while the Yankees will counter with Ron Guidry.

Top of the 1st inning, Yankees batting
-- Jeter grounded out to second
-- Mantle reached on an infield single to the pitcher
-- Ruth doubled deep to left, Mantle to third
-- Gehrig grounded a single up the middle, Mantle scored, Ruth to third
-- AlRodriguez hit a sacrifice fly to center, Ruth scored
-- Jackson popped out to third

Top of the 2nd inning, Yankees batting
-- JDiMaggio popped out to first
-- YBerra grounded out to short
-- Lazzeri struck out
-- Game delayed by rain for 26 minutes

Bottom of the 2nd inning, Red Sox batting
-- Ortiz struck out
-- Speaker flied out to center
-- Fisk grounded out to first

Bottom of the 3rd inning, Red Sox batting
-- Boggs grounded out to short
-- Pedroia walked
-- Garciaparra grounded into a double play, Gehrig to Jeter to Gehrig

Bottom of the 4th inning, Red Sox batting
-- TWilliams flied out to left
-- Game delayed by rain for 10 minutes
-- Ramirez popped out to first
-- Foxx walked
-- Started raining
-- Ortiz grounded out to third

Bottom of the 6th inning, Red Sox batting
-- Foxx struck out
-- Ortiz lined a single down the left field line
-- Speaker grounded out to second, Ortiz to second
-- Fisk grounded out to first

Bottom of the 7th inning, Red Sox batting
-- Boggs struck out
-- Pedroia popped out to second
-- Garciaparra lined a double to right center
-- TWilliams grounded out to second

Top of the 9th inning, Yankees batting
-- Schilling now pitching
-- JDiMaggio popped out to second
-- YBerra lined out to first
-- Lazzeri struck out