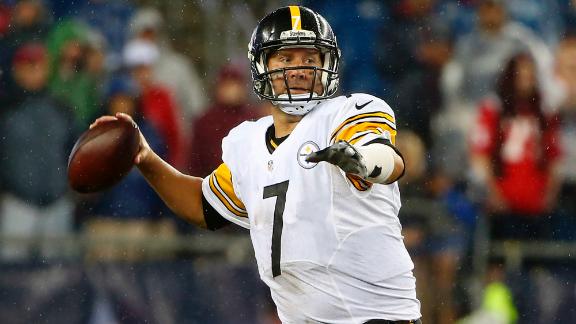 Mark Schlereth believes 49ers vs. Steelers will be a close one

Another big performance from Carlos Hyde will likely assist in quieting a frenzied Pittsburgh Steelers crowd.

Hyde led the NFL in rushing in Week 1 for the San Francisco 49ers and will look to help spoil the Steelers' home opener Sunday.

San Francisco won 20-3 at home over Minnesota on Monday in Tomsula's first game as coach after replacing Jim Harbaugh. He's from the Pittsburgh suburb of Homestead and joked about not filling out ticket requests for friends in the area as well as discussing local dining options.

Tomsula's game plan will no doubt revolve around a steady diet of carries for Hyde, who rushed for a career-high 168 yards with two scores after taking over as the starter with Frank Gore going to Indianapolis. The 49ers finished with 230 yards rushing.

"I just try to be that momentum builder for our offense, get the offense rolling, spark the offense so we're able to drive down the field and put points on the board," Hyde said.

Pittsburgh was solid against the run in last Thursday's 28-21 loss at New England, yielding 80 yards.

The Steelers realize they face a more difficult task Sunday, and no one knows that better than linebacker Ryan Shazier -- Hyde's former Ohio State teammate.

"I didn't need to learn a lot about Carlos, I kind of knew he was going to do that," Shazier said. "I worked out with him a little bit this offseason and I just knew that he had a big year in store for him."

The 49ers' backfield took a bit of a hit when Reggie Bush left with a mild calf strain, and Tomsula said Friday he will not travel to Pittsburgh for this game.

Pittsburgh is looking to move on following the controversy from the New England game in which its headsets didn't function for part of the contest.

Coach Mike Tomlin can improve to 8-1 in home openers. Pittsburgh went 6-2 at home last year before losing there to Baltimore in a wild-card game.

"Every time you come out of the tunnel in Heinz Field the fans are going crazy, it's awesome," quarterback Ben Roethlisberger said. "Maybe it's a little more special just 'cause it's the first one of the year."

Roethlisberger was 26 of 38 for 351 yards with a touchdown and an interception last week. His offense remains without suspended running back Le'Veon Bell and receiver Martavis Bryant.

Sunday will mark the home debut for former Carolina back DeAngelo Williams, who rushed for 127 yards for the third-highest Week 1 total.

"Obviously we're very happy with what he did but we all kind of knew what we were getting in DeAngelo, a guy that puts the work in every day, is a great football player," Roethlisberger said.

Antonio Brown had nine catches for 133 yards and a score. His next reception will make him the fourth player in franchise history with 400.

The Steelers will face a defense that welcomed back linebacker NaVorro Bowman, who played for the first time since a gruesome left knee injury sustained during the NFC championship game at Seattle in January 2014. Bowman had one sack and tied for the team lead with seven tackles Monday.

"You can't say enough about NaVorro Bowman and what he's overcome," Tomsula said. "You respect that."

The 49ers limited Adrian Peterson to 31 yards on 10 carries.

Pittsburgh will face Colin Kaepernick for the first time. Kaepernick was 17 of 26 for 165 yards Monday with seven carries for 41 yards.

"We have to definitely keep him contained, can't let him break the pocket, get outside," linebacker Lawrence Timmons said. "Just fly to the ball with a guy like that."

Australian former rugby league star Jarryd Hayne fumbled a punt return on his first NFL touch for the 49ers before giving way in that role to Bruce Ellington. Hayne compared the miscue to a rugby gaffe he committed.

"I did a similar thing in Origin in my debut game. I gave away a try and I threw the ball when I shouldn't have thrown the ball," Hayne recalled.

Niners' Samuel, Warner set for MRIs on Monday
Linebacker Fred Warner and receiver Deebo Samuel will have MRIs on Monday after leaving Sunday's win over the Vikings with left hamstring and groin injuries, respectively.

49ers beat Vikings 34-26 for 3rd straight win
 The midseason skid that looked as though it could derail the San Francisco 49ers season is firmly in the past.

'Embarrassing': Sullen Steelers swept by Bengals
Pittsburgh veteran quarterback Ben Roethlisberger and the Steelers continue to search for answers after a second loss to the Bengals this season, this time a 41-10 rout Sunday in Cincinnati.

Current NFL playoff picture: AFC shake-up as Ravens slide into No. 1 seed
The Ravens moved into the top seed in the AFC, while the Packers and Buccaneers inched closer to the Cardinals in the NFC. Here is the current postseason outlook.