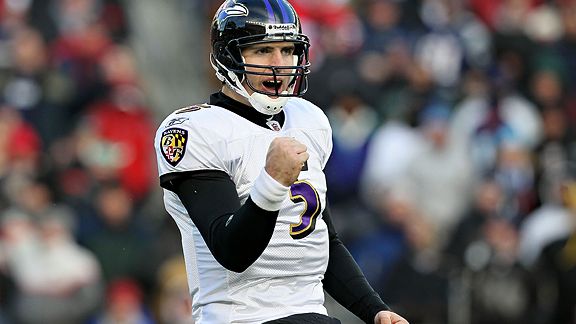 Jim Rogash/Getty ImagesRavens QB Joe Flacco attempted only 10 passes in Sunday's 33-14 win over the Patriots. He'll likely need to up his output if the Ravens have a shot at upsetting Indy next week. Wild-card leaders

Can the upset specials continue in the AFC as the playoffs move to the divisional round?

Peyton Manning of the Colts and Philip Rivers of the Chargers will have something to say about that. Nevertheless, the fifth and sixth seeds in the AFC advanced with the Jets upsetting the Bengals 24-14 on Saturday and the Ravens blowing out the Patriots 33-14 on Sunday.

Home-field advantage hasn't meant a lot in recent years in the AFC playoffs, but the Chargers and Colts are two of the better home teams.

The Chargers-Jets game next Sunday should be the most physical. The Colts-Ravens game next Saturday night could be the closest -- their regular-season meeting was a 17-15 Colts victory in Baltimore. Colts-Ravens is the headliner because of the big names: Manning, Ray Lewis, Ray Rice, Reggie Wayne, Dallas Clark and others.

Here are the 10 biggest questions surrounding Round 2 of the AFC playoffs.

1. What's happened to home-field advantage in the AFC playoffs?

On paper, you'd have to figure that the trend should change this year. The Jets will try to match a rookie quarterback and a low-scoring running attack against Rivers and the high-scoring Chargers. The Ravens lost a home game to the Colts in November and now have to win in Indianapolis to advance.

The NFC wild-card round began Saturday with the Dallas Cowboys' rout of the Philadelphia Eagles and ended Sunday with the Arizona Cardinals' heart-stopping overtime escape from the Green Bay Packers' clutches.

Can the NFC divisional round continue the upward trend? We've got the top two seeds in the mix now as the No. 1 New Orleans Saints are home to the Cardinals and the No. 2 Minnesota Vikings play host to the Cowboys. While the hosts hope rust has not set in during their byes, the visitors seem to be heating up at the right time. All this means we need to answer a few questions before heading into next weekend's matchups.

1. Can Minnesota beat Dallas without Adrian Peterson being a major factor? No. For all the success the Vikings have enjoyed with the addition of quarterback Brett Favre, Peterson is still the man who makes this offense go. As proof, just look at what happened to Minnesota in its two worst losses of the season. Peterson didn't do anything in a 30-17 defeat at Arizona (19 yards on 13 carries) and he was equally invisible in a 26-7 loss to the Carolina Panthers (35 yards on 12 carries). It's one thing if the Vikings are simply taking what the defense gives them. But if that approach leads to the league's top running back becoming an afterthought, then something is dreadfully wrong. If Peterson can't crack the 100-yard mark -- which he hasn't done in his past seven games -- the Vikings will struggle with an extremely hot Dallas defense.

There's a nice rivalry brewing between Cardinals coach Ken Whisenhunt and Packers coach Mike McCarthy. In their 51-45 overtime victory over the Packers, the Cardinals came out smoking; they jumped to a 17-0 lead and played with extra aggressiveness in the first half. Whisenhunt and the Cardinals didn't like the way Green Bay supposedly game-planned in a preseason game against them this summer. They didn't like the way the Packers kept attacking in last week's 33-7 blowout after the Cardinals benched many key starters. Adding to the intensity was a successful onside kick that led to a Green Bay touchdown and cut Arizona's lead to 31-24 in the third quarter. … According to a source, the Buffalo Bills will request a head-coaching interview with Cardinals assistant head coach Russ Grimm, but according to another source, Grimm is expected to decline the request and stay with the Cardinals. Though Grimm wants to be a head coach, he's not particularly intrigued by the Bills opportunity. … There's going to be a pretty good battle between the Bears and the Seahawks for USC offensive coordinator Jeremy Bates. Pete Carroll wants him to run the Seahawks' offense once Carroll formally accepts the Seattle head-coaching job. … The Kurt Warner retirement story is interesting. According to sources, several teammates get the feeling that Warner might retire once the Cardinals' season ends. This year's concussion scared him, a source said. But others in the organization believe he will think about retiring but will ultimately decide to continue playing. Stay tuned. … Clearly, the Philadelphia Eagles aren't going to cut Donovan McNabb, but the Eagles' quick playoff exit puts his future up in the air. The Eagles might be receptive to a trade, and Vikings coach and former Eagles assistant Brad Childress might be first in line to consider trading for McNabb. For that to happen, Brett Favre would have to retire and stay retired, which is a big "if." The Vikings would be desperate without Favre, so McNabb would be their next option. … Some people are pointing to a decline in Bengals quarterback Carson Palmer's passing as the reason for the Bengals' 24-14 loss to the Jets, but a lot of Cincinnati's offensive problems point to the receivers. Since the late Chris Henry was lost at midseason, when he was placed on injured reserve, the Bengals had only two games in which they scored more than 20 points. The Bengals' offense was set up to have Henry run deep and pull coverage back so Palmer could throw to receivers underneath. Losing Henry robbed the offense of speed and separation. … The Cowboys are starting to look like the 2007 New York Giants, who caught fire late and won the Super Bowl. The Giants were about to be dismissed by many, but Eli Manning and the Giants' defense got hot. Tony Romo and Dallas' D are doing the same.

• Offense: Retire? You've got to be kidding. Kurt Warner tied a personal postseason record by throwing for five touchdown passes in a wild 51-45 overtime victory over the Green Bay Packers. Warner completed 29 of 33 passes for 379 yards, and at one point had the Cardinals ahead 31-10. ESPN reported Sunday morning that Warner might retire and that this could have been his last NFL game. Warner didn't have Anquan Boldin, who was inactive because of knee and ankle injuries Sunday. For what it's worth, Warner has thrown 10 touchdown passes in the two games Boldin has missed this season.

• Defense: Who says Ray Lewis is slowing down at age 34? Lewis was like a kid Sunday in the Ravens' 33-14 victory over the Patriots. He was everywhere. Lewis had 13 tackles, a sack, two quarterback hits and one tackle behind the line of scrimmage. Lewis, Terrell Suggs and the rest of the Ravens' defense kept pressuring the Patriots into mistakes and getting the ball back to the Ravens' offense.

• Special teams: It may sound strange to give a kicker a game ball for making a 20-yard field goal and three extra points. But the Jets' Jay Feely actually did much more than that. Punter Steven Weatherford wasn't cleared to play because of an irregular heartbeat in Saturday's 24-14 victory over the Bengals. That forced Feely to handle the punting duties in a game in which the wind chill was 9 degrees. His numbers weren't pretty. He had seven punts and a 31.4-yard average. But three of his punts went inside the Bengals' 20-yard line, and only three were returned, for a mere 26 yards.

• The Bengals' once-promising season came crashing down in a rash of errors. Walker

• Dallas QB Tony Romo answered his many critics with a masterful performance. Mosley

• Ray Rice's early TD run set the tone for the Ravens in a romp of the Patriots. Pasquarelli

• The urgency of the playoffs once again brought out the best in the Ravens. Walker

• Sunday's overtime loss to Arizona was a microcosm of the Packers' 2009 season. Seifert

• Dallas 34, Philadelphia 14
The Cowboys' playoff drought is finally over. Dallas' offense is clicking. Its defense is dominating. Will the good times continue in Minnesota?

• Baltimore 33, New England 14
Wow. A disastrous start (three first-quarter turnovers) was too much for the Patriots to overcome. The Ravens' running game (234 yards) made life easy for QB Joe Flacco, who attempted only 10 passes.

• Arizona 51, Green Bay 45 (OT)
Defense might win championships, but it pays to have an explosive offense in the wild-card round. These teams set a new playoff high for combined points (96) and combined for an eye-popping 1,024 yards. No one's happier than Cardinals kicker Neil Rackers, who botched a 34-yard field goal attempt late in regulation.