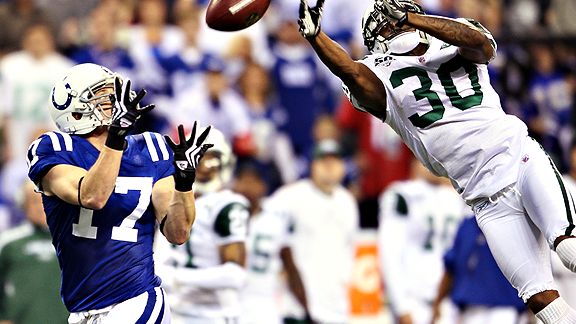 INDIANAPOLIS -- Viewers of Super Bowl XLIV might need an IV to withstand the expected excitement of the matchup between the Indianapolis Colts and New Orleans Saints.

For the first time since 1993, when the Dallas Cowboys faced the Buffalo Bills, the No. 1 seeds in each conference will meet in the Super Bowl. For whatever crazy reason, it's been hard for No. 1 seeds to not only make the Super Bowl, but win it. The last top seed to win a Super Bowl was after the 2003 season, when the New England Patriots beat the Carolina Panthers.

Super Bowl XLIV features the best of the best.

It's Peyton Manning going against a Saints team he grew up following; Manning's father, Archie, was one of the Saints' greatest quarterbacks.

It's Drew Brees and the league's No. 1 offense going against Manning and one of the league's most dangerous possession offenses.

It's New Orleans in its first Super Bowl, ending its 43-year-old drought by beating Minnesota 31-28 in overtime. The city bounced back from Hurricane Katrina. Now, its residents get to watch their team as a Super Bowl participant in Miami.

It's offense going against offense.

Here is the first round of questions heading into two weeks of Super Bowl hype.

1. Is there a significance of having the Saints and Colts in the Super Bowl?

Absolutely. The presence of both teams shows how the league has changed from one geared toward defense and running to passing. Blame the Colts for changing the trend. When the Colts won the Super Bowl after the 2006 season, they were the first team to rank outside the top 10 in scoring defense to win the title since 1983. The Saints ranked 25th in yards allowed per game, and they gave up 21.3 points a game. The Colts ranked 18th in yards allowed and yielded 19.2 points a game.

Both teams win with their offense, and they survive on defense. The NFL has become an offensive league. The Vikings are loaded with stars on defense -- Pat Williams, Kevin Williams and Antoine Winfield, to name a few -- but the Saints were able to score 31 points on them. The Colts' defense was on the field six plays a game more than their offense in the regular season, but that didn't stop the team from winning 14 games.

What's going on with place-kickers in the playoffs? In the greatest era of place-kickers, they are having their worst postseason. Through the playoffs this year, kickers are 20-for-33 on field goals, less than 60 percent efficiency. Nate Kaeding of the Chargers, the most accurate kicker during the regular season, missed three field goals in the Chargers' loss to the Jets in the divisional round. Jay Feely of the Jets missed a 44- and 52-yarder against the Colts. Shayne Graham of the Bengals, Neil Rackers of the Cardinals and Shaun Suisham of the Cowboys were other kickers who had playoff games in which they missed two field goals. … Referee Tony Corrente made one of the most memorable coin tosses in playoff history when he mistakenly called the Jets the Giants. Too bad the Jets' pass defense played like the Giants' pass defense, giving up 377 yards to the Colts. … Here's how bad things are getting for the Pro Bowl. Tom Brady, Peyton Manning, Ben Roethlisberger, Philip Rivers and Carson Palmer turned down the invitation. The AFC had to go all the way down to the sixth alternate, David Garrard of the Jaguars. If players continue to say no, the AFC eventually might get down to JaMarcus Russell. … Mark Sanchez's accuracy and poise during his three playoff games bode well for the future of the Jets. He completed 17-of-30 against the Colts for 257 yards and two touchdowns, but most importantly, he converted 6 of 14 third downs. Knowing they should be good on defense and have a good running game over the next couple of years, the Jets should continue to be a factor in the AFC. … The rib injury that kept running back Shonn Greene out for almost half of the AFC title game hurt the Jets' running attack. Greene had only 10 carries for 41 yards -- and only two carries in the second half. With Thomas Jones looking a little old in the Jets' last two playoff games, there is a chance the Jets could go with Greene as their featured back next season. Jones had 16 carries for 42 yards against the Colts, and 14 carries for 41 yards against the Chargers last week. … I guess it isn't a surprise Reggie Bush didn't repeat his divisional-round performance (217 all-purpose yards) in Sunday's NFC title game against the Minnesota Vikings. Bush doesn't have a history of putting together great back-to-back games. Bush fumbled a punt return toward the end of the first half and briefly gave the Vikings great field position. But an Adrian Peterson fumble allowed Bush to avoid becoming the potential goat. … Listening to Brett Favre after the Vikings' 31-28 overtime loss to the Saints, you get the feeling he'd like to find a reason to return for another season, but he took a beating on Sunday. He has to evaluate whether his body can bounce back. As he said, he might need months to make the decision.

• Offense: Pierre Garcon was the star of the Colts' 30-17 AFC championship victory over the Jets. He caught 11 passes for 151 yards and a touchdown, going mostly against Jets cornerback Dwight Lowery. Jets coach Rex Ryan made a controversial decision to bench Lito Sheppard and replace him with Lowery. Sheppard, who came to the Jets in an offseason trade, struggled in the Dec. 27 game against the Colts and Ryan used him in pass coverage on Sunday only after Lowery was banged up. Peyton Manning and the Colts went to a three-receiver offense after the first two possessions and Garcon was his main target. On the Colts' third possession, Garcon had catches of 27 and 36 yards to set up a field goal that gave the Colts a 3-0 lead. Garcon made incredible catches throughout the day to earn the game ball.

• Defense: Jets coach Rex Ryan used mostly nickel and dime defenses after the Colts went to a three-receiver offense midway through the first quarter, and that left inside linebacker David Harris as the only true linebacker on the field on most passing plays. Inside linebacker Bart Scott was on the sidelines. Outside linebacker Bryan Thomas played more of a defensive end in those packages. That put a lot of pressure on Harris to roam the field and make plays, and he was the defensive star of the day. He had 11 tackles, two sacks, one forced fumble and two quarterback hits. Harris opened the game with a bang, sacking Manning on two of his first five plays, something that is rare for Manning and the Colts' offense. Harris continues to develop as one of the best inside linebackers in the AFC, and his play Sunday took him to another level.

• Special teams: The Saints benefited from great field position on kickoff returns with an incredible 30.5-yard average. Courtney Roby had five returns for 143 yards, including a 61-yarder. Pierre Thomas opened the overtime with a 40-yard kickoff return. The return game gave the Saints field position all night.

• Once the wounds heal, the Jets will realize their future is extremely bright. Graham

• Adrian Peterson experienced a range of emotions in the Vikings' loss. Seifert

• Yes, the team that once was called the Aints is going to the Super Bowl. Yasinskas

• When it mattered most, the Saints' defense rose to the occasion. Pasquarelli

• Brett Favre was a beaten man -- and a beat up one -- after facing the Saints. Wojciechowski

• New Orleans 31, Minnesota 28 (OT)
The wait is over for the Saints, who are marching to their first Super Bowl. The Vikings committed five turnovers; of course, the one everyone will be talking about is Brett Favre's interception in the final minute of regulation. Will that be the last pass of his career? Let the speculation begin.