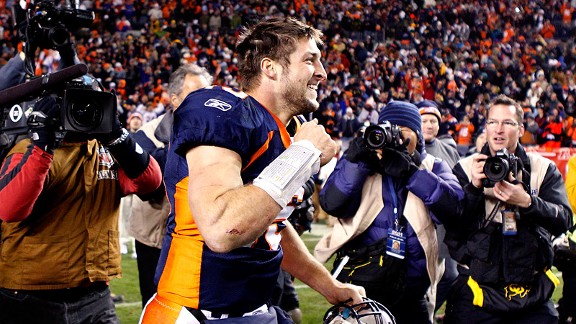 DENVER -- Even though four home teams won in the wild-card round for the first time since 2006, the AFC version of wild-card weekend went against the odds.

How about Tim Tebow beating the franchise that gave us the Immaculate Reception with an 80-yard TD pass on the first play of overtime under the new rules? Odds of teams such as the Houston Texans and Denver Broncos winning opening-rounds games after finishing the season with three-game losing streaks weren't good, but the Texans beat the Bengals and the Broncos stunned the Pittsburgh Steelers.

Since the AFC-NFL merger in 1970, the only team that entered the playoffs with a three-game losing streak and won a postseason game was the 2009 New Orleans Saints, and they were a 13-0 team with Drew Brees at quarterback.

It happened twice this year, with a rookie quarterback (T.J. Yates of the Texans) and Tebow, who is only in his second season.

For the divisional round, the New England Patriots and Baltimore Ravens will be heavily favored. Each could be double-digit favorites because each beat its upcoming opponent in the regular season. The Patriots host the Broncos on Saturday. The Ravens host the Texans on Sunday.

Here are the 10 things we learned from the AFC wild-card round and a look-ahead to the divisional round.

1. What can we expect from Joe Flacco? Despite being 4-3 as a playoff quarterback and being 44-20 as a regular-season starter, the Ravens' Flacco faces a tough spotlight against the Texans. Fans and critics have ganged up on Flacco and offensive coordinator Cam Cameron. Too often, the Ravens shied away from a running attack featuring Ray Rice and went to a Flacco passing offense. Flacco has a chance to go to his second AFC title game with a victory, but it almost seems as though he needs to win a Super Bowl to win respect.

He completed only 57.6 percent of his passes this season, his first sub 60-percent season in four years as the Ravens' quarterback. Houston defensive coordinator Wade Phillips will challenge Baltimore's passing offense with man-to-man coverage, which could take away the long pass to wide receiver Torrey Smith, the Ravens' main deep threat.

NEW ORLEANS -- If this were the Final Four, the people who run March Madness would be salivating. If it were a mixed martial arts tournament, the fans would be vexed as to how to pick the toughest badass. This is what happens when three of the past four Super Bowl champions earn their way to the divisional round of this year's NFC playoffs. Everybody starts bracing for what should be must-see competition.

The Green Bay Packers are here on the basis of being the NFL's best team all season, winners of 15 games just one year after winning it all. The New Orleans Saints, the 2009 champs, stormed in on the strength of a breathtaking performance in their wild-card victory over the Detroit Lions, an effort that saw the Saints generate more yards than any team in postseason history. Finally, the New York Giants took their seat in the next round by trouncing the Atlanta Falcons. The Giants last won it all in 2007, but that doesn't matter. They still have the quarterback who led them to that title (Eli Manning) and the look of a team that might go on a similar run.

Of course, the final participant is a franchise that has won more Super Bowls than any of those squads. It has been nine years since the San Francisco 49ers last played in the postseason and they'd like nothing more than to prove themselves worthy of their respected company. They have the luxury of being rested after a first-round bye. The question is whether such advantages really matter when considering how battle-tested all the remaining playoff participants are. As Saints wide receiver Robert Meachem said, "You have to be confident at this time of year. You can't second-guess yourself."

There will be no second-guessing in this space. Just more questions and answers as we move into the most interesting round of this postseason:

1. Can the Saints play as well in San Francisco as they did at home all season? No. As explosive as New Orleans was in Saturday's 45-28 win over Detroit -- when the Saints amassed an NFL postseason-record 626 yards -- they won't have two things working in their favor next weekend. They won't have the comfortable confines of the Superdome (where they've been unbeaten this season) and they won't be facing a beaten-up, beleaguered secondary. The 49ers ranked second in the NFL in points allowed (14.3), fourth in yards allowed (308.1) and they have playmakers at every level of their defense. What also has to concern the Saints are the problems Detroit's pass rush created for quarterback Drew Brees during a surprisingly disappointing first half in that contest. Though Brees believes his offense will be ready -- "I feel like our offense is built for any conditions," he said after the Detroit game -- the Lions still had him backpedaling and double-pumping often enough to think they could've pulled an upset. The 49ers have the potential to produce such chaos all game.

When will Falcons coach Mike Smith learn to stop going for the fourth-down plays and go for the points? Down 10-2 in the third quarter against the New York Giants, Smith went for his second fourth-and-1 and failed. The Giants scored a touchdown in two plays and the game was over. At the beginning of the second quarter, Smith failed on a fourth-and-1 instead of taking a field goal from the Giants' 24-yard line. … Giants defensive coordinator Perry Fewell might not have to worry about losing his job to Steve Spagnuolo, the hot defensive coach available after being fired by the St. Louis Rams. Fewell stifled Atlanta Falcons quarterback Matt Ryan, limiting him to 199 passing yards and no offensive points. … After three postseason losses in four years, Ryan has to be wondering what it takes to win a playoff game. He has been outscored 102-46 in three playoff games. Throwing downfield has been a problem. He's averaging only 5.8 yards an attempt and has completed only 48.2 percent of his throws that went longer than 6 yards in three playoff games, according to ESPN Stats & Information. … Because of a knee injury, the Denver Broncos made fullback Spencer Larsen inactive, but it was a little surprising they didn't have an active fullback. They deactivated Austin Sylvester, a rookie fullback. For a team that led the league in rushing, going with no fullbacks was odd. Instead, they used two tight ends for lead blocking. … Jeff Fisher made a second trip to St. Louis to discuss the Rams' head-coaching job. He had to address rumors about a possible move to Los Angeles after the 2015 season. He also wanted to see whether they would take his suggestions for general manager. … News that New Orleans Saints defensive coordinator Gregg Williams is a free agent after the season is interesting. He's one of Fisher's best friends and Fisher would need a coordinator. … You sure get the feeling the Tampa Bay Buccaneers want an experienced head coach. They've interviewed former Green Bay Packers head coach Mike Sherman and put in interview requests for Wade Phillips of the Houston Texans and Brad Childress, formerly of the Minnesota Vikings. Childress will interview Monday.

• Offense: Who else? New Orleans Saints quarterback Drew Brees followed up his record-setting regular season with more records. He threw for 466 yards (the most ever in a regulation playoff game) and three touchdowns, completing 33 of 43 passes, in a 45-28 victory over the Detroit Lions. Brees had five consecutive touchdown drives after the start of the second half.

• Defense: Cornerback Jabari Greer intercepted two passes, defended four others and had seven tackles during the Saints' victory over the Lions. He drew Lions rookie WR Titus Young for a lot of the game.

• Special teams: Matt Prater made field goals of 20, 28 and 35 yards to help the Denver Broncos beat the Pittsburgh Steelers 29-23 in overtime. He also recorded six touchbacks in as many kickoffs.

• Houston 31, Cincinnati 10
Arian Foster (153 rushing yards, 2 TDs) shined for the Houston Texans. So did rookie DE J.J. Watt, who changed the game with a highlight-reel, 29-yard interception return for a score.

• New Orleans 45, Detroit 28
What might have been for the Detroit Lions. If not for an inadvertent whistle, Detroit would have led 21-7 early. Still, Drew Brees (466 passing yards, 3 TDs) and the New Orleans Saints' offense scored at will in the second half.

• N.Y. Giants 24, Atlanta 2
The New York Giants, especially their defense, appear to be peaking at the right time. The Matt Ryan-led Atlanta Falcons (now 0-3 in the playoffs) have yet to peak in January. Maybe that's because they still lack a clear offensive identity.

• Denver 29, Pittsburgh 23 (OT)
And you thought Tebow-mania had subsided. Silly you. The Denver Broncos, stagnant on offense in recent weeks, found their big-play mojo against the banged-up Pittsburgh Steelers.