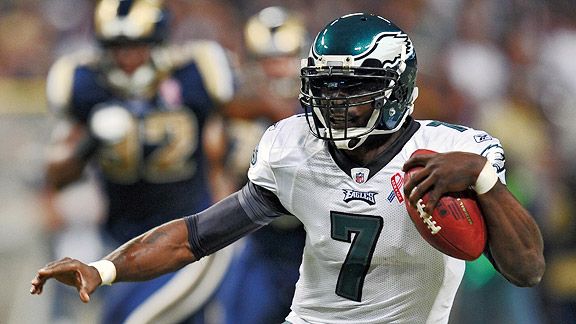 Drew Hallowell/Philadelphia Eagles/Getty Images JOHN CLAYTON QB RANKING (9): Michael Vick suffered through an injury- and interception-riddled 2011. Vick, banged up in the preseason, hasn't played 16 games in a season since 2006.

Five things you need to know about the Eagles:

1. They're angry: The Eagles had high hopes for their 2011 season. Coming off of Michael Vick's career season and having added a slew of high-profile free agents, they believed in themselves as a Super Bowl contender. But losing three of their first four and eight of their first 12 showed them and everyone else that it's not so easy. The Eagles didn't like being embarrassed or held up as last season's biggest flop, and they go into 2012 determined to show that they really are as good as they believed themselves to be this time a year ago.

2. It's all on the quarterback: Vick will play this season under more pressure than any other player in the NFL. Much of the Eagles' early-season issues last year were turnovers, and Vick was a central part of that problem. Their late-season issue was an injury that knocked him out of three games, and with the backup situation unsettled, it's more important than ever for Vick to make the kinds of in-game decisions that prioritize his own health and safety. The Eagles don't need the 2010 version of Vick, but they need a more reliable version than the one they got in 2011, or else the rest of the plan can't possibly work.

3. Is the defense fixed? A new scheme and a new coordinator made for an awkward mix last year, and the decision to ignore the linebacker position was one Andy Reid has since admitted was a "goof." The addition of veteran middle linebacker DeMeco Ryans should help the communication and cohesiveness on defense. The trade of Asante Samuel should help the Eagles plan the man-coverage schemes they want to play with Nnamdi Asomugha and Dominique Rodgers-Cromartie as starters. We know the Eagles will get a ton of sacks, but they need to perform better on the plays that get beyond the line of scrimmage.

4. What's with the wideouts? DeSean Jackson says he's more content and focused now that he has his new contract. Jeremy Maclin says he's in better shape after an offseason that didn't include a health scare and all sorts of medical tests. If they're both at full strength, they give Vick two lethal weapons on the outside -- wide receivers as speedy as any in the league. That should help bring back the Eagles' deep passing game that seemed so strangely absent for so much of 2011.

5. Lining it up: The Eagles' offensive line looked as though it was going to be a team strength in 2012, but its best player, Jason Peters, blew out his Achilles tendon twice this offseason and will miss the year. The Eagles are counting on veteran line coach Howard Mudd to turn Peters' former Buffalo teammate, Demetress Bell, into an adequate replacement who will help protect Vick and help star running back LeSean McCoy offer an encore to his brilliant 2011 season.

McCoy's 217 yards after contact and eight rushes of at least 20 yards on plays outside the numbers were also first in the NFL in 2011. 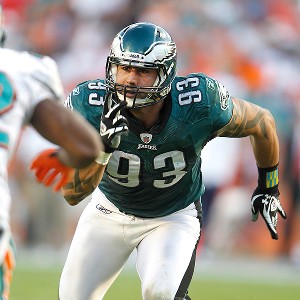 Best Unit: Defensive line
Upgrades will have the Eagles challenging the Giants for the most dominant defensive line in the NFL. Already boasting a dangerous unit, Philadelphia drafted DT Fletcher Cox and DE Vinny Curry. Cox will join Cullen Jenkins, Trent Cole and Jason Babin to form an elite group of pass-rushers. The Eagles' depth is amazing too; I'm particularly high on DT Antonio Dixon as a run stuffer.

Worst Unit: Defensive backs
It's tough to find a soft spot on a team with so much talent. Corners remain set with Dominique Rodgers-Cromartie and Nnamdi Asomugha. But safety and slot corner are a worry. FS Nate Allen shows promise when healthy, but second-year SS Jaiquawn Jarrett needs to improve in coverage.