VANCOUVER, British Columbia -- On Tuesday, Bode Miller has a chance to become the first man to win four Alpine skiing medals in a single Olympics. Day 12 in Vancouver is jam-packed with action. Here are our picks for the top events to watch: 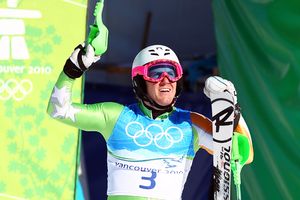 Alpine Skiing: Men's Giant Slalom
The giant slalom, one of Alpine skiing's technical events, will consist of two different gated runs down the Dave Murray course at Whistler Creekside. American Bode Miller will try to become the first man to win four Alpine skiing medals at a single Olympic Games when he skis in Tuesday's race, but it won't be easy. U.S. teammate Ted Ligety is the current leader in the giant slalom World Cup standings and was the overall Cup winner in this discipline last season. Italy's Massimiliano Blardone has reached the podium 19 times in World Cup giant slalom races. Austria's Benjamin Raich is the defending gold medalist. And Austrian Marcel Hirscher and Norway's Kjetil Jansrud are both within 100 points of the overall World Cup lead.

Women's Bobsled, Day 1
Veteran American Shauna Rohbock, the defending silver medalist, begins her bid for gold Tuesday afternoon on a track she calls "stupid fast." Rohbock, though, has had success at the Whistler Sliding Centre; she took gold last season in the only World Cup event held on the Olympic track. Teammate Erin Pac, also a medal contender at these Games, took bronze. The Americans will face tough competition from their German counterparts. Sandra Kiriasis is the defending Olympic champ and has won three of the past five world championships, and Cathleen Martini has won five of seven World Cup races this season.

Figure Skating: Women's Short Program
The women's figure skating event will open under a somber cloud Tuesday night, just two days after the 55-year-old mother of Canadian skater Joannie Rochette passed away unexpectedly in Vancouver. Rochette, though, has vowed to compete, and will be the 26th of the 30 skaters. Olympic favorite Kim Yu-Na of Korea will skate 23rd, one spot after her biggest rival, Mao Asada of Japan. Americans Rachael Flatt and Mirai Nagasu will skate 28th and 11th, respectively.

Freestyle Skiing: Women's Ski Cross
The U.S. does not have a skier competing in the Olympic debut of women's ski cross. But to know which women to watch, fans need look no further than the top finishers at last month's Winter X Games. Gold medalist Ophelie David of France is the most dominant skier in the history of the sport, with six overall World Cup titles and three Winter X golds. Silver medalist Ashleigh McIvor, a native of Whistler, is the reigning world champion. And 20-year-old Canadian Kelsey Serwa, who took bronze at Winter X, finished fifth at the 2009 world championships. Now, all three women hope their success in Colorado translates to this technical Cypress course.

Ice Hockey: Men's Qualification Playoffs
The qualification playoffs have never been so exciting. Team Canada's loss to Team USA Sunday afternoon put it outside the top four teams, the quartet that earned a bye into the quarterfinals. Instead, Canada will play Germany on Tuesday afternoon at Canada Hockey Place, with the winner moving on to the quarters Wednesday. In the other two playoff games at the big rink downtown, Switzerland will play Belarus and Slovakia will play Norway. The final qualification game, between the Czech Republic and Latvia, will take place at UBC's Thunderbird Arena. It's a great chance to see superstar Jaromir Jagr up close; the rink seats just 6,800 people.

Speedskating: Men's 10,000m
If you're Dutch, odds are you're pretty psyched about this race. Distance specialist Sven Kramer, 23, holds the world record in the 10,000, and has since March 2006. He has won three consecutive world championship titles, won the World Cup title at this distance last year and is well on his way to winning another. But fellow Dutchman Bob de Jong is the defending gold medalist and, at 33, is still a threat to younger Kramer. De Jong is also a three-time world champ, and he has earned the nickname "Diesel" for his ability to maintain speed in long races. Plus, he set a personal record in the 10,000 just two months ago.

Lindsay Berra is an avid CrossFitter and a national correspondent for MLB.com. Follow her on twitter @lindsayberra.
Tags:

ESPN and ESPN.com Olympic contributors are covering all of the action from Vancouver. Check back frequently for Olympic updates.