Mike Greenberg and Mike Golic react to news that Lance Armstrong was cited with failing to report an accident and speeding after a Dec. 28 accident, but only after his girlfriend, Anna Hansen, admitted to lying for him.

Bradley Wiggins to race Paris-Roubaix with Sky, then focus on Olympics 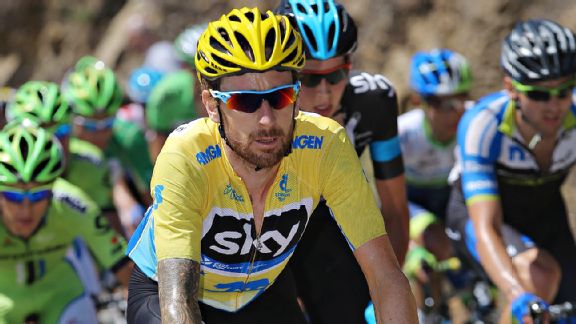 Doug Pensinger/Getty ImagesBradley Wiggins is committed to one more road race before eyeing more Olympic gold in 2016.
MILAN (VN) -- Olympic gold medalist and 2012 Tour de France winner Bradley Wiggins will end his road cycling career with Sky at Paris-Roubaix on April 12 and switch to track racing ahead of the 2016 Olympics in Rio de Janeiro.

“Everyone knows what this team means to me so I’m really pleased to extend my contract until the end of April 2015,” the 34-year-old Englishman said in a Sky press release Monday morning.

“I’ve been with Team Sky from the start. I’ve had some amazing experiences during that time and I hope there are a few more to come.”

Wiggins brought Sky 23 wins since he joined the team for its debut in 2010. In 2012, he reached a new high by winning stage races Paris-Nice, the Tour de Romandie, and the Critérium du Dauphiné en route to his Tour de France title. He went on to claim gold in the London Olympics time trial a week after winning the Tour.

In 2014, Wiggins won the Amgen Tour of California and focused on the Paris-Roubaix cobbled classic instead of the grand tours’ high mountain passes. He placed ninth and said afterwards he would return in 2015 to try to win again.

Want to get caught up on BMX? Get the latest news, information, video and photos. Blog »