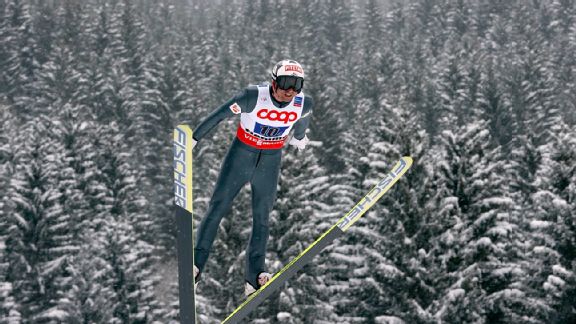 The 37-year-old Stecher, who has been left out of the Austrian team for the Nordic skiing world championships, says "this is the right time. So far I've enjoyed this sport incredibly but now something is missing."

In 1994 at 16, Stecher won the second World Cup he competed in to launch a career that earned him 10 medals from major championships, including two Olympic team event titles in 2006 and 2010, and two world championship golds in 2011.

Stecher calls winning silver at the 2013 worlds shortly after recovering from knee surgery "one of my greatest moments ... That was my emotional highlight."
Tags:

Todd Lodwick: 'Don't count me out'

Part of longevity is luck, and Todd Lodwick has been a very fortunate athlete for most of his 20-year career as an elite Nordic combined competitor.

"I've kind of gained this reputation for being invincible," he said. "Some crazy things have happened to me that might have killed other people."

As luck would have it, his first serious in-season injury came just mere weeks before the Sochi Winter Games, a destination Lodwick had already confirmed by winning the U.S. Olympic trials in late December.

But Lodwick said Tuesday by phone from Park City, Utah that he is optimistic the dislocated left shoulder and strained ligaments he suffered in an off-kilter landing from a provisional jump during a World Cup event in Chaux-Neuve, France, last Friday won't keep him from his sixth Olympics.

"I have every intention of rehabbing this in time to be an integral part of the team," said the Steamboat Springs, Colo., native, who returned from a two-year competitive hiatus to help the U.S. men win a silver medal in Vancouver four years ago. "Don't count me out."

Lodwick lost his balance in mid-air and crashed at the 60-meter mark. He did "a 10-point check -- legs, toes, arms, fingers" -- and initially felt no pain but discovered he couldn't move his left arm. Medical staff reached him quickly. "My first reaction was, 'Put [the shoulder] back in and I'll be good to go,'" he said.

That wasn't advisable, of course, so Lodwick flew home for a medical evaluation. He has to keep the shoulder immobilized for two weeks, but has resumed training from the chest down and is doing intervals on roller skis and simulated hikes on a treadmill to maintain his cardio fitness.

Lodwick said he's had a lot of support from his team, family and friends to help him deal with the psychological blow of the ill-timed injury. "I fully believe this is overcome-able," he said.

The Nordic combined team will be publicly announced on Jan. 25, but the list isn't official until Jan. 27, when the U.S. Olympic Committee must submit a final list. The individual Olympic events are Feb. 12 and 14 and the team event is Feb. 20.

Sochi Olympics: A look at the venues

While Sochi organizers have promised snow will be on the ground despite warm temps in the coastal town, one thing we can say for sure: The venues for the 2014 Winter Olympics will be there.

Here's a look at some of the locales you'll see next month:

The Shayba Arena will host ice hockey games and is in close proximity to other ice skating venues. Capacity: 7,000. 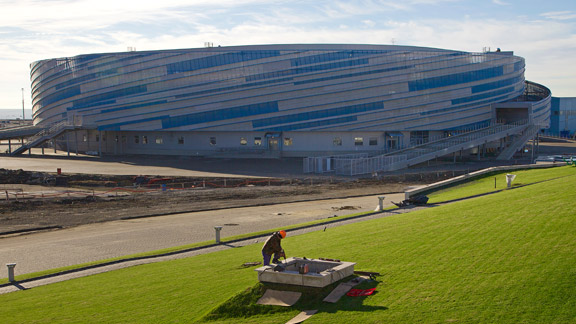 The Olympic Stadium will host the opening and closing ceremonies, and most medal ceremonies. Capacity: 40,000. 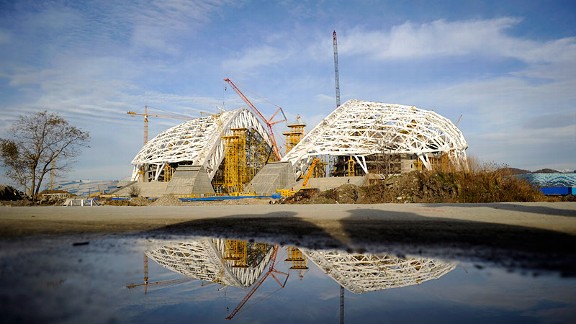 You guessed it -- curling competitions will be held here. The venue is in the center of the "Coastal Cluster," where all of the ice-based venues are located. Capacity: 3,000. 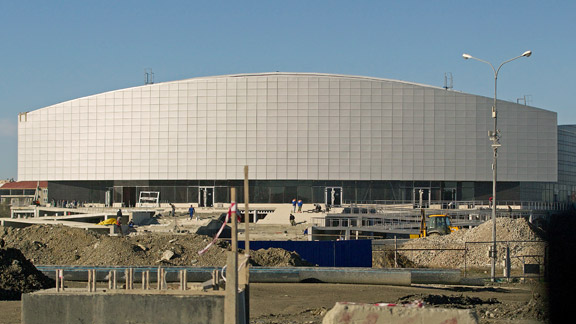 The ice hockey venue is said to be modeled after a "frozen water drop," but spectators may think it resembles a disco dance floor when they see the roof light up in multiple colors at night. Capacity: 12,000.

Years of perseverance by the core athletes on the U.S. Nordic Combined team paid off at the 2010 Vancouver Games as they ended their podium drought with a spectacular breakthrough -- three individual medals, including Billy Demong's gold, and a silver in the team event. Demong promptly announced he was committed to another four-year Olympic cycle, while his fellow veterans Todd Lodwick and Johnny Spillane elected to take a season-by-season approach.

It's tough to come up with an encore after last winter's performance. The team doesn't want to vanish from the winter sports map after planting its flag so emphatically, and various circumstances have contributed to a slow start on the World Cup circuit, but head coach Dave Jarrett said the plan going into 2010-11 has always been to gear everything toward the odd-year World Championships next February in Oslo.

Demong, 30, married former skeleton racer Katie Koczynski and remodeled his house from the ground up last summer. With Jarrett's blessing, he deliberately backed off his customary training regime in the offseason, although he did don his cyclist's helmet and logged three stage races including the Tour of Utah.

Somewhat predictably, Demong finished way out of the money in the season's first two World Cups in Finland and Norway and is back home in Park City, Utah, contemplating "a whole new set of rules to live by for this new goal," he said.

"I went over [to Europe] and got hosed ... but a little bit of struggling made me hungry," Demong said. "My mind is starting to put the puzzle back again, training-wise and life-wise, for what I need to do for Sochi [in 2014]."

He'll return to defend his 2009 world championship, but hasn't set his schedule between now and then yet.

Spillane, 30, who collected two individual silver medals in Vancouver, tore up a knee during Demong's wedding weekend jumping off 70-foot-high Pulpit Rock into the deepest part of Lake Placid and has been rehabbing after surgery to repair his ACL. Jarrett didn't begrudge the recreational leap -- "I've jumped off Pulpit Rock too, a lot of people have -- he just landed wrong," the coach said from Ramsau, Austria, site of this weekend's World Cup event. The good news on that front is Spillane has been medically cleared to begin ski jumping again and should be in shape to compete in Europe next month.

Lodwick, 34, will race in Ramsau. Meanwhile, Jarrett has focused his efforts on younger athletes like brothers Bryan and Taylor Fletcher (24 and 20, respectively), twins Brett and Eric Camerota (25) and World Cup rookies Brett Denney (20) and Nick Hendrickson (19). Both Taylor Fletcher and Brett Camerota were on the Olympic roster, and Camerota was part of the silver medal-winning quartet in the team event.

Nordic Combined skiers often mature slowly -- Lodwick is a notable exception on the U.S. team -- but Jarrett, a former national team member himself, said his developing talents have a big advantage now.

"All they've grown up knowing is [the team's] success at the very highest level," Jarrett said.