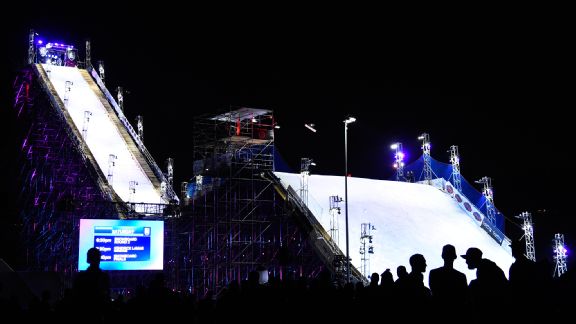 PASADENA, Calif. -- Air + Style, a 22-year-old contest known as the breeding ground for snowboarding trick progression mostly held in Innsbruck, Austria and Beijing, came to the United States for the first time last weekend thanks to new majority owner Shaun White. This time, skiers were invited, too.

Dubbed "a mix of Coachella and X Games" by White, the inaugural event was occasionally at odds with its Pasadena neighbors, much like the annual music festival and its hosts in Indio.

Noise ordinances prompted Saturday's headliner Kendrick Lamar to rant about the low volume, and he left the stage with 40 minutes remaining in his scheduled set. A riser designed for VIPs had to be dismantled and removed during the opening hours of Saturday's festival, among other reported permitting difficulties.

Even the ramp, originally planned to be inside the Rose Bowl based on renderings revealed at the announcement last fall, was constructed on the front lawn outside of the stadium.

But the contest itself, the reason for the event in the first place, kept with its innovative tradition. Yuki Kadono landed the first switch backside triple cork 1620 in a snowboarding competition to take the gold medal on Saturday. Sebastien Toutant of Canada finished second and Norwegian Ståle Sandbech got third. Sandbech also wrapped up the snowboard season title after making the final.

Just two years ago, only four riders could land a triple cork. Now, it's a trick anyone with gold medal ambitions has to have in their repertoire as Air + Style has continuously rewarded progression. Saturday was no different.

The roster of snowboarders and skiers featured 22 Olympians, including American Sochi gold medalist snowboarder Sage Kotsenburg (who didn't qualify for the finals). Even though the ramp ended up on the lawn, the 200-foot tall snow covered centerpiece shone like a giant icicle in the middle of Southern California utopia framed by palm trees and mansions.

And on Sunday, when a rare rainstorm threatened to wash out the competition, the skiers gave it their best, despite the conditions. After several long bouts of rain, however, the ramp had had enough. Round 1 standings held, and American Olympian Gus Kenworthy was awarded the ski gold medal.

Despite all the medals, money and sponsors, giant ramps and cameras, Toutant said snowboarding is always all about having fun.

"Snowboarding has advanced so much that we're continuously pushing the limits of what we can do." Toutant said. "But I think kids need to just have fun and forget about the fame."

Check out more photos from Air + Style on XGames.com.
Tags:

Action sports at the Sochi Olympics: One year later

2/21/15
5:35
AM ET
By ESPN.com | ESPN.com
One year ago this month, the lives of a dozen or so freeski and snowboard athletes were flipped upside down when they won gold medals for their countries at the Sochi Winter Olympic Games in Russia.

XGames.com checked in to see what's changed for the freeski and snowboard slopestyle and halfpipe gold medalists since bringing home the prestigious hardware. See the gallery here and check out an update from slopestyle gold medalist Sage Kotsenburg below. 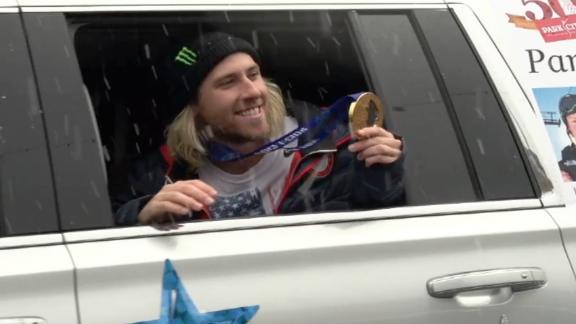 Want to get caught up on snowboarding? Get the latest news, information, video and photos. Blog »