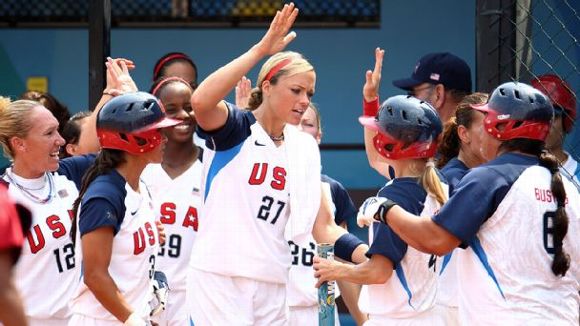 TOKYO -- Japanese Olympic organizers opened the application process Monday for sports hoping to be added to the 2020 Tokyo Games.

The Tokyo organizing committee launched a two-stage procedure that gives the host city a chance to add one or more sports to the program.

Baseball and softball, which have been off the Olympic program since the 2008 Beijing Games, are considered favorites because of their popularity in Japan. Other possibilities include squash, karate, skateboarding and surfing.

In all, 33 international sports federations have been invited to apply by a June 8 deadline.

Applications will be examined by a special "additional event program" panel, with a shortlist of candidates selected on June 22.

Finalists will make a presentation in Tokyo in August, and the organizing committee will make its recommendation to the International Olympic Committee by Sept. 30.

The IOC will make the final decision in August 2016 at its meeting in Rio de Janeiro.

The Tokyo committee said the bidding competition would be "open and fair." It said the additional event or events should have a "focus on youth appeal" and engage the Japanese population and a worldwide audience.

The new procedure stems from the IOC's "Olympic Agenda 2020" reform package approved in December. IOC President Thomas Bach is looking to bring more flexibility to the sports program, which currently features 28 sports and about 300 medal events and 10,000 athletes.

10/28/11
1:41
AM ET
By Graham Hays | ESPN.com
Almost everything about the softball team that took the field representing the United States in the Pan American Games was unfamiliar, from a new coach and new players to the part it plays in the sport's newly tenuous position in the international picture. So it's hardly the same old story that the end result looked decidedly familiar.

Playing with a roster composed almost entirely of active or recent collegians and almost completely devoid of experience in major international tournaments, the United States earned gold in the Pan American Games by winning all nine games it played. The success marks the seventh Pan American gold medal in a row for the United States in softball and the eighth in nine tries at the biennial event.
[+] Enlarge 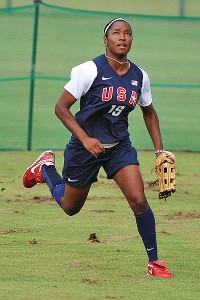 Of course, it's only fitting that a team that began the year and the tournament facing questions as to its ability to live up to its uniforms needed a last bit of adversity to find an answer.

Operating in a new financial reality after softball's elimination from the Olympic program, Team USA parted company after winning the World Cup of Softball in July, reconvening in Texas only a few days before the trip to Guadalajara. A handful of exhibitions against Texas A&M and the University of Houston provided easy wins but didn't necessarily clear the cobwebs of a long layoff.

"We played OK in those games," Team USA coach Ken Eriksen said. "Even though we won the three games pretty easily, I didn’t feel like we were all there together. ... I still wasn’t comfortable as a coach knowing we were going to be able to hit on all cylinders."

After a 10-0 win against Venezuela to open the tournament itself, the United States played doubleheaders each of the next two days. The team swept all four of those games against the Dominican Republic, Mexico, Cuba and Puerto Rico, allowing just one run in the process, but it still wasn't, in the coach's words, playing "dominant" softball.

And in the span of half an inning against Canada the following day, all the skepticism about sending a young, inexperienced team to represent American softball seemed to come to fruition.

Canada defeated essentially the same team three months earlier in pool play in the World Cup of Softball, but the one and only loss for the United States against its northern neighbor in the Olympics, World Championships or Pan American Games occurred in 1983, before any of the current roster was born. Another loss seemed entirely possible when the Canadians took a 5-0 lead in the bottom of the first inning behind the likes of Melanie Mathews, Jen Yee and Jenn Salling, three players with impressive credentials and considerably more experience in the environment than most of their opponents.

But after the United States loaded the bases in the top of the second, Michelle Moultrie singled home a run to get them on the board and chase Canadian starter Ashley Lanz. An illegal pitch and two walks brought home two more runs and chased reliever Sarah Phillips. Now facing Jenna Caira, the pitcher who beat them in July, Team USA tied the score with runs on a single and a wild pitch. Three more runs in the next inning set them on course for a 12-5 win. It wasn't an elimination game, but it was a statement performance.

There was another close call against Cuba on the next-to-last day of play, but by the time they run-ruled Canada 11-1 in four innings in the gold-medal game, any questions had been answered.

"To tell you the truth, the rest of the tournament, it was already done," Eriksen said of the aftermath of the comeback. "By the time we hit the third inning against Canada, they were smoking, they were gelling. They achieved something of significance as a unit, coming back five runs against a very, very good Canadian team. And when they did that, I thought their confidence level went way up. I don’t think they thought they could be beat by anybody, and it showed the rest of the tournament."

For years, leadoff hitter Natasha Watley gave the United States an offensive asset almost as difficult for opponents to duplicate as pitchers like Cat Osterman and Monica Abbott were in the circle. In baseball terms, it was like Team USA writing Rickey Henderson's name on the lineup card while the rest of the world made do with Coco Crisp. Watley made the softball diamond look small, the fences too close and the bases too close together. Moultrie emerged as the same kind of player on the college level last season for the University of Florida, sharing Most Outstanding Player honors in the Women's College World Series despite playing for the losing side in the championship series, and began to transfer those skills to the international game this summer.

"With Natasha Watley in the leadoff spot you always had an opportunity to be up 1-0 after the first batter, not just the first inning," Eriksen said. "Michelle Moultrie brings that same type of threat right away. Michelle Moultrie, like Natasha Watley, can drop a bunt to get on base, she can slap a ball in the hole to get on base and she can hit it over the fence for home runs. She’s a triple-threat type kid. She’s clutch, clutch in the RBI positions. The more she gets comfortable wearing red, white and blue, I see the sky as the limit for her."

The youth movement for Team USA was not a voluntary or preferred shift, but it did allow players already on a path to stardom, like Moultrie, to accelerate that journey. It doesn't stop there. Whether a decade of stardom awaits, players like Christi Orgeron and Keilani Ricketts, who struck out 22 batters in 16.1 innings and got the clinching win, made the most of their opportunity. In another era, i.e. a couple of years ago, Lauren Gibson would still be several years away from even making a national team cut, let alone starting in a gold-medal game. Now a junior at the University of Tennessee and one of the youngest players on a team with no lack of competition for that honor, Gibson battled injuries through the summer months and totaled just eight at-bats and two singles in the World Cup. But after a hot start toward the bottom of the order in Guadalajara, she found herself batting third in the comeback game against Canada and finished the tournament hitting .500 with eight RBIs.

"I think our offense just absolutely took off," Eriksen said of moving Gibson up in the order. "So putting Lauren in the three-spot made her feel maybe a little more significant. I don’t know, but she’s a heck of a hitter and she really was one of the big keys to our offensive explosion."

The next step for USA Softball is next summer's World Championship in Whitehorse, Canada, the sport's signature event without the Olympics. Eriksen said the door isn't closed for players who elected not to participate with the national program this year. And though it's easy to see some of those with experience from the gold-medal effort in the 2010 World Championship, young players like outfielder Alissa Haber or infielder Tammy Williams come to mind, fitting in rather seamlessly next summer, the coach also made clear the value he places on the chemistry this team developed.

All of it may be the silver lining on a dark cloud -- the future health of the national program -- but it was a golden effort for a team constantly compared to the impossible standards of a golden generation.

9/08/11
4:07
AM ET
By Zach Zimmerman | ESPN.com
To most of us, running a half-marathon midway through a pregnancy sounds ludicrous. To softball legend Jennie Finch, it sounded like a warm-up.

"I went from a 2-mile run to a half-marathon," Finch said. "It's not the way you want to go about it. But I ran the whole way. I was thinking that it would be a good way to keep my competitive spirit alive. "

Finch, who had her second son, Diesel Dean Daigle, on June 19, announced Wednesday that she is partnering with Timex and participating in the Nov. 6 running of the NYC Marathon just months after welcoming her second son into the world.

The two-time Olympic medalist will start last in the race, and Timex will donate one dollar for every person she passes to the New York Road Runners youth program. Although Finch hasn't set a timed goal, she has her eyes set on a certain mark.

[Former NFL receiver] Amani [Toomer] did it last year with Timex and passed over 25,000 people. That got my competitive juices flowing," Finch said. "I'm aiming for that right now."

Softball still has long road to 2020

7/06/11
6:38
AM ET
By Sarah Spain | ESPN.com
On Monday, while you were no doubt enjoying a cold brew at a barbecue and watching fireworks, the softball world had something more than brats and dogs to cheer for. Inserted quietly into a news release revealing the events to be added to the 2014 Winter Games was a short list of sports to be considered for the 2020 Olympics -- and softball was on it.

While news of softball's inclusion is huge, the sport still is one of eight vying for a single spot. The others to be considered by the International Olympic Committee are karate, roller sports, sports climbing, squash, wakeboard, wushu and baseball. In September 2013, the IOC will meet in Buenos Aires, Argentina, to select one sport to add to the program at the 2020 Games.

Not only does softball need to beat out seven other sports, the people in charge at the IOC also need to be convinced of its merit after dropping it from the Olympics several years ago. In 2005, the IOC elected to remove baseball and softball from the Olympic program for the 2012 Games, and in 2009, voted to keep them from the 2016 Games as well.

Those who voted to cut softball argued that the sport lacks appeal on a global stage, and the results of the first four Olympic softball competitions support their claims. The U.S. won the gold in three of those four Olympics, outscoring its opponents 51-1 en route to gold in 2004.