SOCHI, Russia -- T.J. Oshie brainstormed while he skated to center ice, desperately trying to come up with one last move to end an epic shootout. He had already taken five shots at Sergei Bobrovsky, and the Russians were still even.

Yet Oshie was chosen for the U.S. men's hockey team with just such a situation in mind, and the shootout specialist concocted one last clever goal to silence an arena filled with screaming Russian fans.

A disallowed goal preserved a tie and allowed the Americans, led by T.J. Oshie, to prevail in an epic shootout, writes Pierre LeBrun. Story

Oshie scored four times in the shootout and put the winner between Bobrovsky's legs in the eighth round, leading the United States past Russia 3-2 Saturday in the thrilling revival of a classic Olympic hockey rivalry.

"I was just thinking of something else I could do, trying to keep him guessing," said Oshie, the St. Louis Blues forward. "Had to go back to the same move a couple times, but I was glad it ended when it did. I was running out of moves there."

International rules allow the same player to take multiple shots after the first three rounds of a shootout, and U.S. coach Dan Bylsma leaned on Oshie's array of slick shots and change-of-pace approaches to the net. Oshie scored on the Americans' first shot before taking the last five in a row, going 4 for 6 against Bobrovsky and disappointing a Bolshoy Ice Dome crowd including Russian President Vladimir Putin.

"I aged a couple of years in that shootout," Bylsma said. "We had other guys that are capable, but T.J. was the guy who was going well. It seemed like he was going to score every time he went."

Oshie's final shot was a beauty: He threaded a forehand right through Bobrovsky's pads, the puck punching the back of the Russian net emphatically enough to pop the water bottle on top into the air. 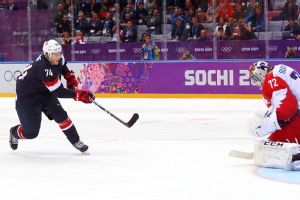 T.J. Oshie lifted the U.S. to a win over Russia with his shootout heroics.

"At some point, you think, `Does he have any more moves left?" U.S. captain Zach Parise said. "But he did a good job. ... That's hard to do, to get in a goalie's head and throw him off a little bit."

Oshie was among the final selections for the U.S. roster, and though the 27-year-old from Warroad, Minn., has never had a 20-goal NHL season, he leads American-born players with seven shootout goals this season.

The U.S. men are only interested in the one that all but wrapped up an automatic berth in the quarterfinals next week.

"I think you're going to see T.J. Oshie become a household name after that display he put on," said David Backes, Oshie's teammate in St. Louis. "The kids will be out on the pond probably in Minnesota right now, throwing a 5-hole on the goalie three or four times in a row."

Cam Fowler and Joe Pavelski scored in regulation for the Americans in the marquee game of the preliminary round. Jonathan Quick made 29 saves and stopped five attempts in the shootout as the U.S. improved to 2-0.

Captain Pavel Datsyuk scored two goals in regulation and another in the shootout for the Russians, who rallied from a third-period deficit in a fast-paced game. Russia also had an apparent goal waved off with 4:40 left because Quick's net came off its moorings.

"The U.S. team is a good team and a good test for us," Datsyuk said. "We played good, but the result is not good."

The shootout finish was entertaining, but the entire game was international hockey at its most compelling -- and the third period was a thriller.

Pavelski scored the tiebreaking goal for the Americans on a power play with 10:33 to play, but Datsyuk tied it with 7:16 left during a Russian power play, spurring Putin out of his seat to cheer.

How The Tournament Works

In the Olympic hockey tournament, there are three groups of four teams. A regulation win is worth three points, overtime/shootout wins worth two points, overtime/shootout losses worth one point. The three group leaders in points and the team with the next best point total through the three preliminary games receive a bye to the quarterfinals. The remaining eight teams play qualification games, with the four winners of those games playing the four teams with the byes in the quarterfinals. Winners move to the semifinals and finals.

After review, the officials waved off Fedor Tyutin's apparent go-ahead goal because the net was loose, incensing the crowd. Russian coach Zinetula Bilyaletdinov and Alex Ovechkin both felt Quick had intentionally dislodged his net earlier in the sequence.

"I don't know what happened there, but definitely was a goal," Ovechkin said. "Nobody touched the net. Their goalie touched the net and put it out. But the referee has to see it and at least give him two minutes, you know?"

Quick claimed he didn't even realize the net had come unmoored.

"You need to catch some breaks to win games," he said.

Both teams had quality chances in overtime, but Bobrovsky denied Patrick Kane on a breakaway in the most hair-raising moment.

Datsyuk and Oshie both missed in the seventh, and Quick denied Kovalchuk again before Oshie ended it.

The arena was packed to overflowing with fans of both nations jovially posing for photos and comparing their colorful sweaters. The Russians waved hundreds of flags, blew horns and banged drums from the first moments of warm-ups.

Although the game had little impact on the medal race in Sochi, the finish woke up the echoes of a U.S.-Russia rivalry best known for the "Miracle on Ice" at Lake Placid in 1980, when a team of American college students stunned the Soviet Olympic team.

The sociopolitical impact of that game is long gone, and the nations have already met three previous times in the Olympics since NHL players joined the games in 1998.