CONCORD, N.C. -- Kasey Kahne and Kyle Busch have agreed to stay away from each other the next time they compete on a restrictor-plate track.

They said it in fun on Monday when Busch called to apologize for wrecking Kahne in Sunday's race at Talladega Superspeedway, but it would be a smart move.

Twice this season -- first in the February Daytona 500 and again on Sunday -- Busch wrecked Kahne in almost the same way. If Busch had done that to almost any other driver in the garage, there might have been a brawl. 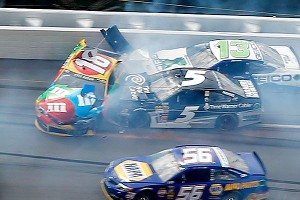 If he had done that to Kevin Harvick or Tony Stewart, who were innocent victims in Sunday's Lap 42 incident that triggered a 16-car melee, it could have gotten real ugly.

"When I first got in that accident, I was sitting there and was like, 'Where is he?' I was looking for him and thinking, 'What should I do? Should I run down and grab him? Should we wrestle?'" Kahne said during a Tuesday event promoting the May 26 Coca Cola 600 at Charlotte Motor Speedway.

"See, that's what I'm thinking, but that's really not me. I just got in the ambulance."

He smiled as he said this.

That doesn't mean Kahne wasn't surprised a driver of Busch's talent wrecked him for the second time in as many plate races. It also doesn't mean he wasn't frustrated.

Were it not for those two crashes, Kahne likely would be no worse than second in points behind Jimmie Johnson instead of sixth, 84 points back. With a little luck, Kahne could be in the lead.

Consider: Kahne finished 36th at Daytona and 42nd at Talladega. He collected a mere 10 points between the two races. If he finished fifth in both races, which was entirely reasonable because he had a fast car in each, he would have another 68 points, without bonus points for leading a lap.

That would have put him in second, 16 behind Johnson.

If he won both races -- highly unlikely, but possible -- he would be at least tied for the points lead with his Hendrick Motorsports teammate. If he led the most laps for additional bonus points, he would have the outright lead.

But Kahne isn't losing sleep over all the lost points. He was more upset that he lost the Las Vegas race to Matt Kenseth and that Mark Martin wrecked him at Richmond, where the driver has more control over his car than at Dega or Daytona.

"At Richmond, I was really mad," Kahne said.

Not that anyone could really tell. The soft-spoken Kahne is one of the nicest drivers in the garage. He seldom lets his emotions get the better of him.

And Kahne could tell from the look on Busch's face in the infield care center that the wreck wasn't intentional.

"It's that type of racing there," he said. "There is a couple of times when you're racing at other tracks and you get wiped out by the same guy and you're definitely in a much different place. I don't know. I just try not to let it bother me."

Kahne still needs to stay away from Busch at Daytona.