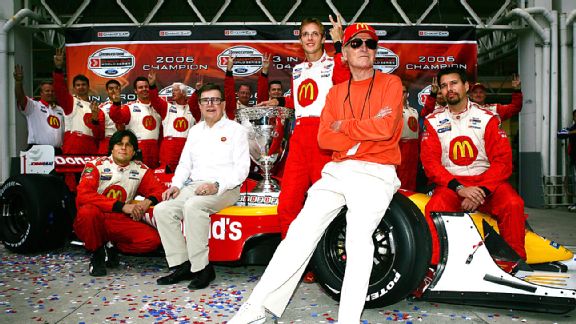 Darrell Ingham/Getty ImagesSebastien Bourdais, center, was the last in a long line of Newman/Haas Racing championship drivers. He is flanked by team owners, Carl Haas, left, and Paul Newman.

INDIANAPOLIS -- It still seems strange -- not to mention inaccurate -- to talk about Newman/Haas Racing in the past tense.

After all, NHR is still in operation at the team's longtime base in Lincolnshire, Ill., with Brian Lisles leading a small crew. However, Newman/Haas hasn't fielded a car in the IndyCar Series (or any other series) since the end of the 2011 season, and most of the team that won 107 open-wheel races and eight CART- and Champ Car-sanctioned Indy car championships has moved on to new opportunities.

Of course co-owner Paul Newman passed away in 2008, and Carl Haas is in declining health and retired from public life. But last weekend in Indianapolis, about 70 Newman/Haas team members, along with friends and families, came together to celebrate the team's long and successful run at the top. 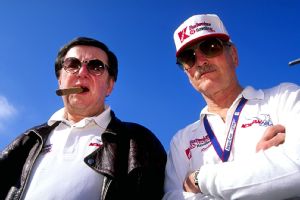 Jamie Squire/Allsport/Getty ImagesTeam owners Carl Haas, left, and Paul Newman might have seemed like an odd pairing, but together they ran one of the most successful teams in the history of Indy car racing.

Formed by former Can-Am competitors Newman and Haas in 1983 to field cars in the CART/PPG Indy Car World Series for Mario Andretti, Newman/Haas was a stalwart Indy car team for nearly 30 years.

From 1983 to 2011, Penske Racing was the only team that won more races; Chip Ganassi Racing, which began fielding Indy cars in 1990, won fewer races but boasts one more championship than NHR.

"You couldn't find two more opposite people [Newman and Haas] to work together, but they created one of the best race teams in America," said Sebastien Bourdais, who won four Champ Car-sanctioned titles for NHR between 2004 and '07. "I had a really enjoyable time driving for Carl and Paul, and obviously a lot of other people have really fond memories, too."

"I wouldn't have missed it for anything," he said. "The most favorite time of my career is the two years I was with Newman/Haas. Everyone, from Carl and Berni [Haas, Carl's wife] to all the guys that worked on the cars to the people who worked in hospitality, we are all a family."

People often think of Newman/Haas as "Mario's team," but Michael Andretti was actually the lead NHR flag-bearer for many years. Michael earned 30 of his 41 Indy car race wins while driving for Newman/Haas, as well as the 1991 CART-sanctioned championship.

Michael revealed that, as a 20-year-old aspiring racer, he had a hand in the creation of Newman/Haas Racing.

"Carl was smart," Michael said with a laugh. "He hired me first to drive his Formula Ford car as a way of getting closer to dad. Then he got dad to drive his Indy car. So I helped start it all." 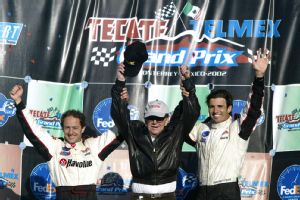 Jonathan Ferrey Allsport/Getty ImagesCristiano da Matta, left, said he wouldn't have missed the reunion for anything. Here he is celebrating winning the opening CART race of the 2002 season with team owner Carl Haas and teammate and third-place finisher Christian Fittipaldi.

Michael graduated to Indy cars at the end of Newman/Haas' first season in the CART series, but it wasn't until 1989 that Michael joined NHR for four memorable years teamed with his father.

"It was the most special time in my career, no question," Michael said. "We were a family there. It was everything you wanted in a race team. Carl and Paul would give you the equipment and support, and you wanted to do it for them. Great times, and it's so cool to see so many people here."

Andretti actually drove two stints for Newman/Haas; 1989-1992, the four years he lined up alongside his father in what Mario called "a dream scenario." Then, after a year of Formula One and a year with Ganassi's Indy car team -- in which he scored Chip Ganassi's first two race wins as a sole team owner -- Michael returned to Newman/Haas from 1995 to 2000.

Michael then drove for Team Green in 2001 and 2002, eventually acquiring ownership in the team now known as Andretti Autosport. In many ways, Michael's team has taken on the role Newman/Haas used to play as the main competitor for Penske and Ganassi.

It's not a surprise that, when NHR ceased racing operations, several team members found work with Andretti Autosport, and Michael said his time with Newman/Haas shaped his vision of how to operate a race team.

"There were times when Carl would do things and you'd think 'Why are you doing it that way?'" Andretti said. "Now, being on this side of the fence, I understand things that he would do and why he would do things. It's a different world being on the other side, for sure. But I definitely learned a lot from Carl and Paul."