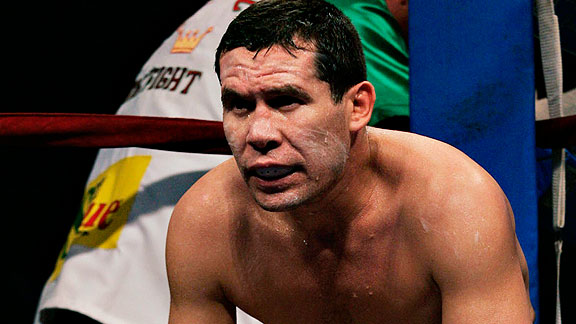 Julio César Chávez is a former professional boxer who was a six-time world champion during his 25-year career. Chávez won a record 89 fights before his first loss. Chávez retired with a record of 107-6-2 and is considered one of the greatest boxers of all time. He was inducted into the Boxing Hall of Fame in 2011.

Julio César Chávez started his amateur boxing career at the age of 16. He wasted no time turning pro, fighting his first professional fight at the age of 17 against Andres Felix. Chávez knocked out Felix in the sixth round.

It appeared Chávez had suffered his first loss on March 4, 1981 against Miguel Ruiz. Chávez landed Ruiz with a punch that knocked him out as the bell was sounded. Chávez was disqualified and Ruiz was declared the winner. The following day, the Mexican boxing commission reversed the decision and awarded the win to Chávez.

Chávez fought very often, usually scheduling fights once a month for a span of three years. By the time Chávez got his first title shot for the vacant WBC super featherweight title, he was 44-0 in just four years as a professional. Chávez won his first championship belt by beating fellow Mexican Mario Martinez in the eighth round by technical knockout.

Chávez decided to move up in weight classes and fight at lightweight. He faced Edwin Rosario for the WBA lightweight title on Nov. 21, 1987. Before the fight, the Puerto Rican Rosario threatened to send Chávez back to Mexico in a coffin and he insulted the Mexican people. Chávez landed over 60 percent of his punches, nearly shutting Rosario's eye closed before the fight was stopped in the eleventh round by his corner.

After finding success as a lightweight, Chávez moved up to super lightweight. He defeated Roger Mayweather for a second time, this time for the WBC light welterweight title. Their first fight only lasted two rounds but Mayweather proved to be more of a worthy opponent the second time around. Chávez eventually won in the tenth round by technical knockout.

Chávez had one of the greatest fights in boxing history while unifying the light welterweight titles on March 17, 1990 against Meldrick Taylor. Taylor dominated a majority of the fight against Chávez early on but he was taking a physical beating, to the point where he was so confused that he went to the wrong corner in between rounds. With two of the judges having the fight in favor of Taylor heading into the 12th and final round, Chávez needed a knockout to maintain his undefeated record. After being forced into the corner, Chávez delivered a right blow that knocked out Taylor. Taylor managed to get to his feet before the mandatory 8-count but referee Richard Steele felt he was unable to continue and stopped the fight with two seconds to go. "The Ring" magazine called it the Fight of the Year for 1990 and Fight of the Decade for the 1990s.

Chávez 's next challenge came against Hector "Macho" Camacho on Sept. 12, 1992. It was Chávez 's first main event on pay-per-view and he won easily by unanimous decision over the Puerto Rican boxer.

After defeating Greg Haugen in front of 132,247 fans at Estadio Azteca stadium and scoring a victory over top ranked contender Terrence Alli, Chávez had his first blemish on his perfect record. Chávez moved up in weight class to welterweight and challenged the WBC welterweight champion Pernell Whitaker on Sept. 10, 1993. The crafty Whitaker controlled the fight but it was ruled a draw with two judges scoring the fight at 115-115.

Chávez suffered his first loss two fights later against Frankie Randall by split decision. Randall knocked Chávez down for the first time in his career and he was deducted one point in the seventh and eleventh round for low blows. The two points that referee Richard Steele deducted from Chávez was the ultimate reason why he lost the fight.

There was a rematch ordered and four months later, Chávez reclaimed his WBC light welterweight title after the fight was stopped in the eighth round because of a headbutt.

Chávez and Taylor met in the ring again in 1994, four years after their epic fight, with Chávez winning by technical knockout.

On June 7, 1996, Chávez faced rising Mexican superstar Oscar De La Hoya for his WBC light welterweight title. Chávez suffered a deep cut above his eye in the first round and the fight was eventually stopped in the fourth round, the second loss of his career.

De La Hoya vacated the WBC light welterweight title, setting up a match between Chávez and Miguel Angel Gonzalez, which ended in a draw.

Moving up to welterweight, Chávez faced De La Hoya in a rematch, this time for the WBC welterweight title. De La Hoya used his power and strength to force Chávez to tell his corner he couldn't continue after the eighth round because of a cut on his lip.

Chávez lost to Tszyu on July 29, 2000, in what would be his final attempt at a title. Chávez stepped away from the ring following a Nov. 24, 2001 victory over Terry Thomas.

After two years away from the ring, Chávez avenged his loss to Wise with a victory after the fight was stopped due to cuts. The card also featured Chávez 's two oldest sons. To thank the fans of Mexico, Chávez and his sons fought on a card titled "Adios, Mexico, Gracias" on May 22, 2004. Chávez took on Randall for the third time in his career, winning the rubber match by unanimous decision. The farewell tour continued in 2005 with Chávez defeating Ivan Robinson at Staples Center.

Chávez 's final match was on Sept. 17, 2005, losing in fifth round to Grover Wiley after suffering a hand injury. He finished his professional career with a record of 107-6-2. Chávez holds the record for the longest undefeated streak in boxing history at 89-0-1 when he lost to Randall.

Julio César Chávez was born on July 12, 1962 in Ciudad Obregon, Mexico. He has two sons who are both boxers; Julio Cesar Chávez Jr. and Omar Chávez.

Inducted into Boxing Hall of Fame in 2011